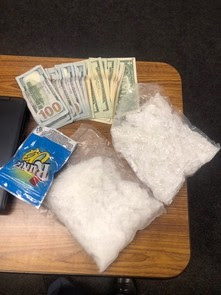 At approximately 10 p.m. on Monday, Trooper Kyle Taylor from the Indiana State Police in Sellersburg was patrolling on I-65 in Scott County. Trooper Taylor observed a Silver Chevrolet Tahoe traveling northbound at a high rate of speed and initiated a traffic stop, stopping the car on the northbound Austin exit.

The driver, 39-year-old Derek Ellis, of Indianapolis, was wanted on a warrant out of Marion County. During his arrest, troopers found two pounds of meth and a small amount of marijuana.

As a result of the investigation, Ellis, along with the passenger, 31-year-old Tyesha Bell, also of Indianapolis, was arrested on charges of dealing meth, possession of meth and possession of marijuana.