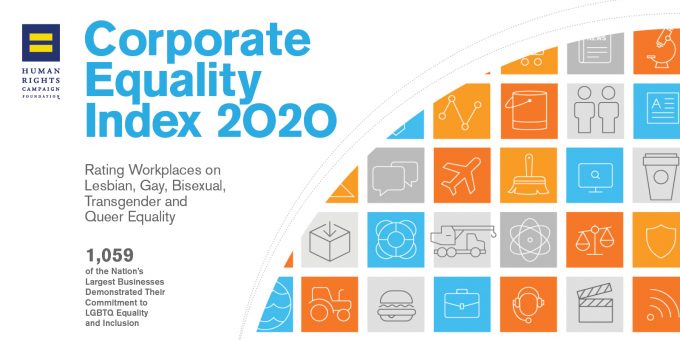 (WASHINGTON) – America’s leading companies and law firms are stepping up in record numbers to adopt increasingly forward-looking policies and practices to meet the needs of their lesbian, gay, bisexual, transgender and queer (LGBTQ) workers in the U.S. and abroad, according to the 2020 Corporate Equality Index (CEI) released today by the Human Rights Campaign (HRC) Foundation, the educational arm of the nation’s largest LGBTQ civil rights organization.

In the most rigorous assessment of LGBTQ-inclusive workplace policies and practices to date, a record of more than 680 companies has been designated a Best Place to Work for LGBTQ Equality by the HRC Foundation for their efforts in satisfying all of the CEI’s criteria results, earning them a 100 percent rating. Top-scoring companies include six in Indiana.

In total, 1059 companies and law firms were officially rated in the new CEI, up from 1028 in last year’s survey. The report also unofficially rated 122 Fortune 500 companies, which have yet to respond to an invitation to participate in the CEI survey assessing their LGBTQ policies and practices. The average score for companies and law firms based in Indiana is 68 percent. Of the 15 companies ranked, six earned 100 points, one earned 90 points and above, and two earned 80 points and above.

For the first time, HRC this year is giving special recognition to the 11 companies that earned top marks on all three of HRC’s workplace equality assessments: the CEI, as well as Equidad MX and Equidad CL. HRC’s groundbreaking Equidad program recognizes Latin American companies and U.S. multinational companies for their work in Mexico and Chile.

“These companies know that protecting their LGBTQ employees and customers from discrimination is not just the right thing to do — it is also the best business decision. In addition, many of these leaders are also advocating for the LGBTQ community and equality under the law in the public square,” said HRC President Alphonso David. “From supporting LGBTQ civil rights protections in the U.S. through HRC’s Business Coalition for the Equality Act, to featuring transgender and non-binary people in an ad in Argentina, to advocating for marriage equality in Taiwan — businesses understand their LGBTQ employees and customers deserve to be seen, valued and respected not only at work, but in every aspect of daily life.”

More than 260 top businesses — including 191 that earned top scores on the CEI — are also corporate supporters on the Equality Act, critically important bipartisan legislation that would finally add clear, comprehensive non-discrimination protections for LGBTQ people to our nation’s civil rights laws. While the Supreme Court decides whether LGBTQ people are protected by federal employment non-discrimination law, these companies are holding the line for their employees and their families.

Other key findings revealed in the 2020 CEI:

The full report is available online at www.hrc.org/cei.