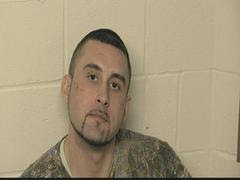 (SCOTT CO.) – An Indianapolis man was arrested for vehicle theft and other charges after leading police on a 20-mile pursuit in Scott and Jackson Counties Monday evening.

Shortly before 7 p.m. Monday, the driver of a white, 1994 Chevrolet log truck pulled into the Taco Bell in Scottsburg for a dinner break.  The driver left the vehicle running with the keys still in the ignition.  A few minutes later, the owner realized the truck was missing from the parking lot and spotted the vehicle northbound on I-65.

Indiana State Troopers soon located the vehicle and attempted to stop the truck near the Austin exit; however, the driver failed to pull over and continued northbound.

Troopers continued to follow the truck, which at one time appeared to be stopping at the Exit 41 ramp, but then continued north.  The truck eventually stopped at the bottom of the Seymour ramp at Exit 50 when Seymour City Officers assisted Troopers.

The driver, 29-year-old Robert Lee Coffee, of Indianapolis, was arrested and transported to the Scott County Jail without further incident.  He was charged with auto theft, resisting arrest, and reckless driving.

Police learned Coffee was hitchhiking from Bowling Green, Kentucky, and stole the vehicle when he was unable to obtain a ride to Indianapolis.

The log truck was returned to the owner without damage.