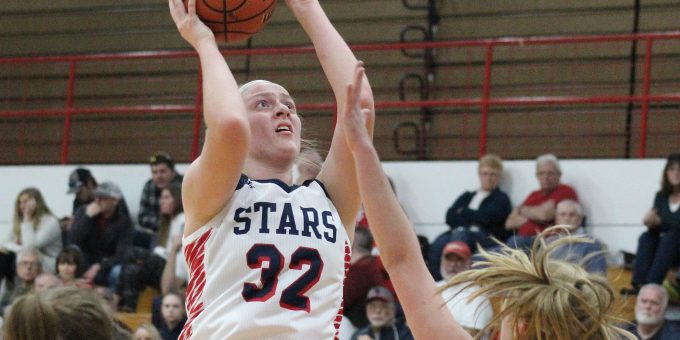 BEDFORD – Did someone pull the fire alarms at Bedford North Lawrence? The walking 3-alarm blaze, a kid who is high school basketball’s version of the Human Torch, has not been doused. When she’s on fire, the Stars are indeed fantastic.

Nobody is hotter than Chloe McKnight, who has swished 14 of her last 17 3-pointers, and few teams in Southern Indiana are playing better than the Stars, who have won seven straight games (11 in a row against in-state competition).

Can they keep the fires burning away from home? BNL (14-4 and ranked No.14 in Class 4A) will face a challenge to its streak when it visits North Harrison (13-6) on Thursday night.

The Lady Cats have been dangerous at home. They thumped 3A No.7 Silver Creek by 14, conquered 3A No.5 Evansville Memorial in friendly surroundings. And they’re tired to losing to BNL, having dropped 10 straight in the series. The Stars could be headed toward a hose down.

“They’re having a good year,” BNL coach Jeff Allen said. “They’re a concern because they have kids who can score and they have size. They can create havoc with their length.”

North Harrison, coming off a surprising 60-40 loss at Corydon in its county rivalry battle on Tuesday, has a new look from several angles. First, veteran coach Missy Voyles resigned in mid-July, and assistant Barry Geltmaker stepped into that void. Second, the Cats had to find a new identity with the graduation of career scoring leader and Indiana All-Star Lilly Hatton (2,052 points), who finished second in state history with 490 blocked shots.

Ali Saunders, an electric sophomore, has assumed the main role, averaging 16.2 points, 5.2 rebounds and 4.2 assists per game. She gets valuable contributions from sophomore Diana Burgher (12.1 points as she comes back from a two-week absence with a sprained knee) and 6-3 senior Lucy Robertson (9.1 points, 5.9 boards).

“We rely on Saunders quite a bit,” Geltmaker said. “We still have big girls in the middle. Our biggest problem has been finding a fifth starter who will step up. Sometimes you never know what you’re going to get. It’s been a roller-coaster.”

“They required Lilly to do a lot,” Allen said. “This year, kind of like us, they’re more balanced.”

BNL definitely has multiple weapons. Irye Gomez, a little overshadowed by her flaming teammate, is averaging 12.6 points, and senior center Madison Webb is totaling 11.3 points and 5.7 rebounds. But, without doubt, the story this last week was McKnight’s amazing shooting as she scored a career-high 33 points against Columbus East and came back with 24 during the wipeout of Floyd Central.

Brittani Rizzi still holds the single-game (9) and single-season (82) school records for treys, but McKnight has threatened the first in the last two games and could threaten the latter if she continues her torrid pace.

“Rizzi had moments where she was like that,” Allen said. “But Chloe has been consistent over the season, probably the best I’ve seen since I’ve been at BNL. It’s how she approaches the game, she’s known for more than a jump shot, and she’s bought into that. She rebounds, defends, drives it and looks for teammates. She has elevated her entire game.

“I like the way we’re shooting the ball right now. That makes it difficult to zone us. We hope to continue that.”

BNL dominated the Cats twice last year, winning the regular-season meeting 55-31 (Jorie Allen had 16 and McKnight 15) and the sectional semifinal 56-35 (Webb had 15 points).

Last meeting: The Stars swept the Cougars during two clashes last season, winning the regular-season meeting 55-31 and the sectional rematch 56-35.

Game notes: BNL has won 10 straight in the series. North Harrison has moved down to Class 3A for the postseason after two years in 4A because of the success factor rule.