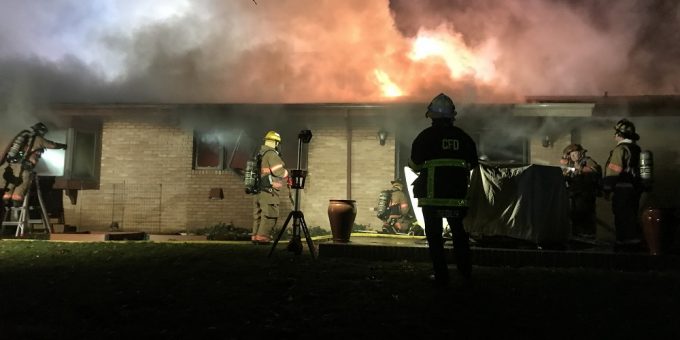 Columbus firefighters were alerted to the blaze in the 1500 block of South Drive at 4:08 a.m.

The homeowner was able to escape safely with his cat and dog after being awakened by smoke alarms in the home. One cat remains missing. The homeowner’s wife and children were not at home when the fire started.

When firefighters arrived smoke was billowing out of the basement area.

Columbus Fire Department Capt. Mike Wilson said firefighters tried to fight the blaze from inside the basement but was hampered by changing fire and smoke conditions and unbearable heat, causing crews to pull back to the exterior of the home. Firefighters battled the blaze from outside the home.

The fire burned through the basement into the ground floor, causing portions of the floor to collapse. The fire then spread into the attic and roof.

Firefighters had the fire under control at 6:30 a.m. Firefighters were on the scene for around 10 hours fighting flare-ups and extinguishing hot spots.

The home is considered a total loss.