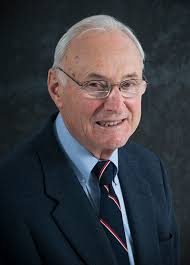 (EVANSVILLE) – David Rice, the first president of the University of Southern Indiana, has died at age 90.

The school in Evansville was a regional campus of Indiana State University for 20 years until it became a separate college in 1985. Rice was president until 1994.

“More than a half-century ago, an institution of public higher education in southwestern Indiana was only a dream,” said Ronald Rochon, the current president. “It took the perseverance of Dr. Rice and those around him to make this dream a reality.

“Never underestimate the power of an idea, how it can transform lives, and how it can propel a community,” Rochon said.

Rice died Wednesday at his home in York, Pennsylvania, the university said. A funeral will be held on campus at Carter Hall on Jan. 25.

Rice was inducted into the Evansville Regional Business Hall of Fame in 2013. The university library is named for him.