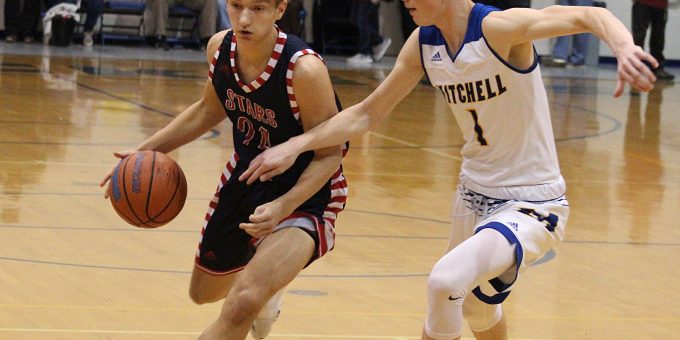 MITCHELL – At the moment of truth, amidst last-possession bedlam, with the ghosts of 1986 aroused, the basketball world trembled. The shot, to end Bedford North Lawrence’s three decades of dominance and sneering bragging, was airborne.

Could it be? Michael Bell, Mitchell’s best and the obvious shooter to launch, caught a pass on the deep left wing, took a darting step toward the defense, then stepped back for a jumper. He faded just a bit to avoid BNL’s Ben Cosner, and the ball clipped the front rim.

Wait, Mitchell’s Edric Cash claimed the rebound on the baseline and fell back to fire. Another chance to slay the dragon. Short again, the buzzer sounding to end the most suspenseful clash between the county rivals in 14 years.

BNL dodged those final two arrows, escaping with a breathless 56-55 victory while extending its winning streak in the Lawrence County series to 34 years. Kooper Staley scored 15 points and Ben Cosner added 14 as the Stars (7-7) ended a two-game skid.

Notice the name missing among BNL’s leading men? Brayton Bailey, sick enough to vomit in the locker room after the clash, was limited to 7 points during one of the worst – yet courageous – offensive performances of his career. BNL coach Jeff Hein – welcome to the rivalry, Coach – had been asking for others to shoulder more, and this night BNL had to have it.

Mitchell (5-5 with four straight losses) mourned what might have been. Bell was sensational with 25 points, and the Bluejackets battled back from a 12-point deficit in the fourth quarter to take the lead on two Luke LaFevor free throws with 1:40 left.

“We played our hearts out,” Mitchell coach Doug Thomas said.

LaFevor’s free throws put Mitchell on top 53-52. The next 100 seconds were frantic.

Bailey, keeping everything down in a pressure situation, made two free throws, but Mitchell’s Jarrett Phillips came back with a floater in the lane for a 55-54 advantage at 1:15.

Bailey drove and dished off to freshman Colton Staggs, who was hammered on the way to the basket. The rookie, who had not made a varsity free throw all year, dropped a pair. How’s that for clutch? BNL now edged in front 56-55 with 1:03 left.

For nothing to happen on the scoreboard those final 63 seconds, plenty happened. Bell rimmed out two free throws with 42 seconds left, but Cosner missed a driving shot from close range. That set up Mitchell’s final flurry, with Bell cutting off a screen, dishing to a teammate, getting it back, firing . . .

“One or two things go differently and break our way, and we’re celebrating like you can’t believe,” Thomas said. “But it didn’t.”

BNL got off to a sizzling start as Staley exploded, hitting all five of his shots during an electric first quarter for a 23-14 lead. BNL extended the margin to 14 before Mitchell switched to a triangle-and-two defense and scrambled back within 33-29 at the half.

“We had to do something,” Thomas said. “Staley was on fire. We didn’t want him touching the ball any more. It was effective, something to go to in a desperate situation. And it looked like it was going to get desperate pretty quick.

“It looked like it was going to get ugly, they were about to extend it several times, and for our guys to hang in and battle all the way back and take a lead was outstanding.”

BNL regained control in the third as Colten Leach slashed to a 3-point play, recovered a loose ball off his own bad pass and scored, and Cosner canned a 15-footer at the buzzer for a 49-39 lead. Bailey opened the fourth with his second basket, and it would be BNL’s last as turnovers allowed the Jackets to rally.

“Every time we stretched it out, they seemed to find a way to get back in it,” Hein said. “You have to give Mitchell credit.”

Bell had four treys and was perfect at the line until the last two twirled out. Cash finished with 10 points. So it was appropriate for the two Jackets that did the most damage have the chance to do the ultimate damage.

“It wasn’t like it was a wide open look, he didn’t sit there and tee it up,” Thomas said of the last Bell bomb. “It was contested but it was good look. I’m not unhappy with the shot at all. Then we rebounded and got a OK look back.”

Jackson Miracle and Leach added 9 points each for the Stars.

“Kooper had a heck of a first quarter, Ben was able to get going, and Leach made some plays,” Hein said. “It was good to see other guys contribute. It was a win, with our best player not feeling well, so it was nice to see some guys step up.

“The drawback was we didn’t defend them as well as I would like to see. We did not have an answer for Bell. They found a way. That’s the bottom line.”

BNL, with Bailey’s availability uncertain, will travel to Jennings County on Saturday night. The Panthers pummeled Crothersville 82-47 on Friday night.