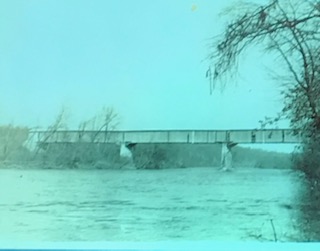 The covered bridges were used to cross 3 major creeks; Beam Blossom, Salt Creek, and Clear Creek and the White River near Gosport.

Some of the covered bridges that were covered during the presentation used to cross Salt Creek and Clear Creek where Lake Monroe is now. Some of those bridges included the Nancy Jane bridge, Cutright, Judah Bridge, Goodman, and Harrodsburg bridges just to name a few.

He also talked about the covered bridges in the northern part of Monroe County which included Mcmillian, Mt. Tabor, Johnson, and Dolan covered bridges.

“Covered bridges were used for dances, and get-togethers, where residents would have dinners and bring musical instruments. At times, livestock such as pigs, cows, and chickens could be found inside the structure. Of course, traffic was not as busy back in those days as few cars passed by during the day.” Broshears noted.

Borshears noted some of the ways the bridges were constructed using the Burr Arch, Howe Truss, bridges the most common type of covered bridge construction was the Burr Truss.

Borshears just recently completed his book “ The Covered Bridges of Monroe County” which is available to purchase to be able to learn about yesterday’s covered bridges.

During Monday evening’s presentation, he also brought a Model T light, an eight-day lantern, and a buggy lantern to give attendees a feel for how things were during the time period.

Each month the Lawrence County Historical & Genealogic Society will have a speaker attend following each their monthly meeting held on Monday the second Monday of the Month at 7:00 p.m.