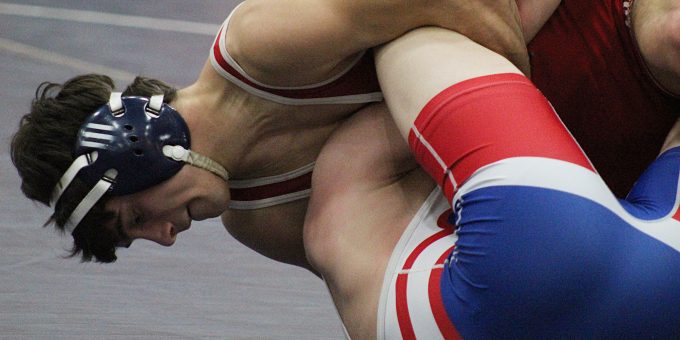 BEDFORD – Derek Hutchens allowed a smile to escape, and pumped his fist. He waited until his Senior Night, with his career clock ticking down, to finally conquer a mat nemesis. And it felt good.

Hutchens posted two victories in his BNL home farewell as the Stars split matches with Owen Valley and Paoli on Thursday night. The Patriots, for the second time this season, topped the Stars in dominant fashion, recording a 61-15 triumph. BNL bounced back with a 54-6 victory over the Rams.

Hutchens had two impressive performances at 132 pounds, pounding OV’s Connor Rodgers in 57 seconds in the opening contest, then flattening Bryson Long in 1:28 in the nightcap. The win over Long was his first in multiple battles, thus the silent celebration on an emotional night.

Smith nearly ran out of air in his opener against OV’s Charlie Campbell at 160, but he held on for an 8-4 triumph. He stopped Paoli’s Tanner Coe in 3:30.

Those two had BNL’s only wins on the mat against the Patriots, although Byron Kyger had the match of the night at 195. He tangled with Bryce Mills in a duel that went to a 1-minute overtime, then two 30-second extra sessions. Mills finally prevailed in the fourth overtime, riding out the frame for the deciding point in what wrestler’s call the “ultimate overtime” for a 5-4 win.

”Byron had one heck of a match,” BNL coach Greg Stevens said. “You have to realize when he started wrestling, he weighed 345. He’s lost a lot of weight, he’s lost a whole person.

“We knew we‘d have a tough time with Owen Valley. They’re a good team, although I felt we gained ground on them from the last time. We executed what we wanted to do against Paoli.”

The Stars won six of the seven contested matches against the Rams. James Covey improved to 24-2 this year with a pin of Marty Higgins in 2:27 at 220, and Brax Huber turned around an 8-3 deficit with a pin of Samson Johnson in 3:09 at 120.

Channlor Engleking pinned Hannah Albertson in 1:34 at 138, and Reese Hamblen snagged Sawyer Livingston in 3:52 at 145.

The Stars will visit Madison for the HHC meet on Saturday.