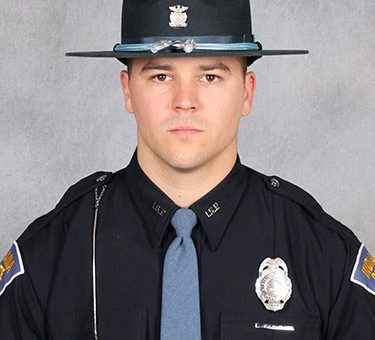 Probationary Trooper Benjamin Smith is from a class of 37 recruits who graduated from the 79th Indiana State Police Recruit Academy. During the 25 week training period the recruits received over 600 hours of classroom instruction as well as nearly 400 hours of hands-on practical and scenario-based training exercises. P/Trooper Smith will now be assigned to train with veteran troopers for the next 13 weeks before receiving his own patrol car for solo patrol.

Benjamin Smith is a native of Mooresville, Indiana and a 2012 graduate of Mooresville High School. Smith spent six years proudly serving his country (active duty) in the Air Force and then served an additional year in the Air National Guard.

Smith’s Grandfather, William “Bill” Smith also served as an Indiana State Trooper from 1967 to 1998 retiring as a Detective Sergeant from the Indianapolis Post.

Lieutenant Paul Bucher said, “We are proud to welcome Probationary Trooper Smith to the Bloomington District and look forward to him joining our veteran troopers who serve each of the communities in our district.”