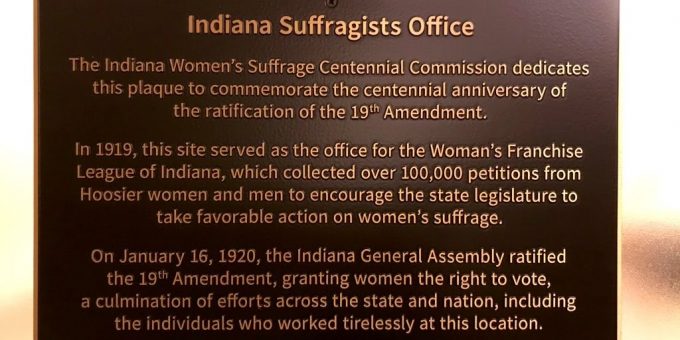 “Today is such an important day, honoring the 100th anniversary of women’s right to vote,” said Lt. Governor Crouch. “Women have such a powerful collective voice and it’s especially important in this election year that we honor that right with a wonderful day of festivities, history and many guests to share it with. I’m honored to recognize the roles and impact women have made and continue to make in our state and our nation.”

The day started with a breakfast for legislators and other Statehouse guests, where the Indiana Suffrage History poster was unveiled. There was also a dedication of a plaque that will honor the Suffragists’ original Statehouse office. The Girl Scouts of Central Indiana offered a special pledge and the Capital City Chorus provided a special performance. The Indiana Historical Society’s traveling exhibit was also on display and will remain in the Statehouse Rotunda through February 3, 2020.

The celebration concluded with guests traveling to the House Gallery for the introduction of a special Resolution honoring the 100th anniversary of the state’s ratification of the 19th Amendment. This special Resolution took place in the morning at the beginning of the House session and then again in the afternoon in the Senate.

The Indiana Women’s Suffrage Centennial Commission was established to commemorate the centennial anniversary of the ratification of the 19th Amendment in 2020. In order to increase visibility and awareness of the 100-year anniversary, the Commission launched a website, in partnership with Indiana Humanities. It contains resources, recent news and upcoming events scheduled throughout the year.

The Commission encourages events and activities throughout 2020. If there is an event or activity to celebrate Hoosier women winning the right to vote that your community or organization would like included on the website’s Master Events Calendar, please email Contact@IndianaSuffrage100.org. The Commission looks forward to celebrating this important anniversary in the months to come!