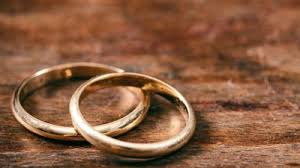 (RICHMOND) — An eastern Indiana man who spent months heartbroken after losing his late wife’s wedding ring while out shopping has been reunited with the gold band thanks to a posting on social media.

Charles McNally was shopping in September when the wedding ring his wife of 56 years, Barbara, had worn until her death in April 2018 slipped off his finger.

The Richmond man and his family searched repeatedly but to no avail for the missing ring at the stores, he’d visited that day in the city about 60 miles (96 kilometers) east of Indianapolis.

“I said, Oh no Lord, please not that,” McNally told the (Richmond) Palladium-Item.

His daughter, Angela McNally, posted a message in Facebook shortly after the ring vanished asking for helping finding the band, which is engraved on the inside with, “Because I love you.”

Richmond resident Destry Glover had found the ring in the self-checkout lanes of a Walmart store. She saw the Facebook posting and sent Angela McNalley a message about the ring. But Angela didn’t see that message for four months because it ended up in a Facebook message request feature she didn’t know existed.

She finally stumbled onto Glover’s message a week ago while poking around her Facebook page.

Glover returned the ring to Charles McNally on Monday during a meeting in a restaurant’s parking lot. Although he offered Glover a $100 reward for the ring, she declined the money.

“You don’t find very many people like that anymore,” he said.