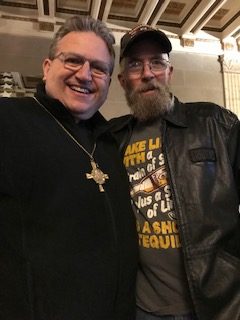 (BEDFORD) –  A “ Prayful Protest” was held Saturday afternoon at the Lawrence County Courthouse to protest the literature left on Bedford’s north side last week.

The protest was against the actions taken against the community, by people who came from Texas and Missouri to spread Nazi propaganda.

“It was my thought to bring the community together, show Lawrence and Owen Counties we are one. As well as all other counties; throughout the State of Indiana. We are One Nation, Under God, Indivisible, with Liberty and Justice for all people.” Rev. Powell stated.  “Regardless of color, faith, background, that is the American Spirit. We pray the spirit to be ever-present, in our lives today.”

He thanked the crowd that attended for caring about the community, and the country, and the City of Bedford. And thanked them for praying for the nation and future.

Both political parties were invited to the event.

Liam Dorris denouncing Nazism and White supremacy, “We should not allow anyone to divide us.”.

The event lasted about 45 minutes.

Rev. Mark Powell told WBIW he asked for the resignation of Bedford Police Chief Terry Moore who he believes did not properly investigate this seriously. Powell also stated he contacted the FBI to which they stated they do not comment on any criminal case.

Powell following the event stated,  “ The Spencer Police Department or Bedford Police Department did not take this seriously enough. The vehicle had Missouri plates but held a Texas Drivers license, two males that were with this woman did not want to identify themselves which Powell stated raises immediate red flags.” ..

Powell states “I am the garbage man, and I am here to go to Washington D.C. and take the garbage out.”