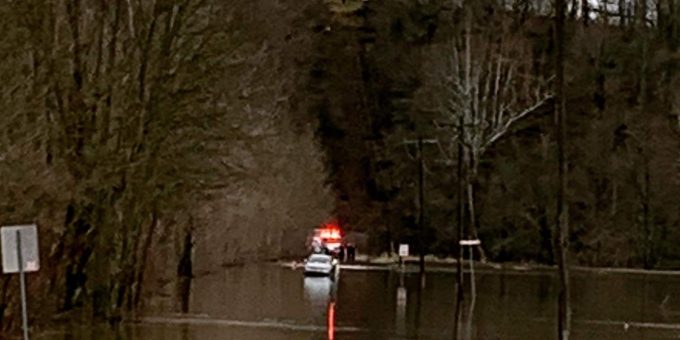 Firefighters were originally dispatched to Simpson Chapel and Williams Road.

While en route the location was changed to Bottom Road, and then to North Maple Grove Road.

Dispatchers were able to contact the people in need and learned they went down a road that started with a “W”. Based on descriptions the trapped driver gave it was then believed they were on Woodall Road.

A firefighter from NMFT reached out to a local farmer in the area to see if they could see a car in the water. The farmer was able to see the vehicle in the water from his house and advised NMFT units that the trapped people were indeed on Woodall Road.

Since Woodall Road is in Bean Blossom Township, NMFT requested that Ellettsville and Bean Blossom Fire Departments be dispatched to the scene.

NMFT had responded with the rescue boat and deployed it to rescue the two individuals from the car.

Other water rescues occurred Saturday afternoon and evening with the Beech Creek Twp. Fire Department responding to a water rescue on State Road 43 near Solesberry.

The Indian Creek Fire Department, Lawerence County Police Department, IU Health Ambulance responded to the area of Dillman Road and Silverville/Williams Road on a reported person trapped in high water. No one was transported to the hospital in that incident.

Motorists are reminded not to drive in flooded roadways. “Turn Around, Do Not Drown.”

Several roadways remain closed due to high waters. Some will be closed throughout the week.