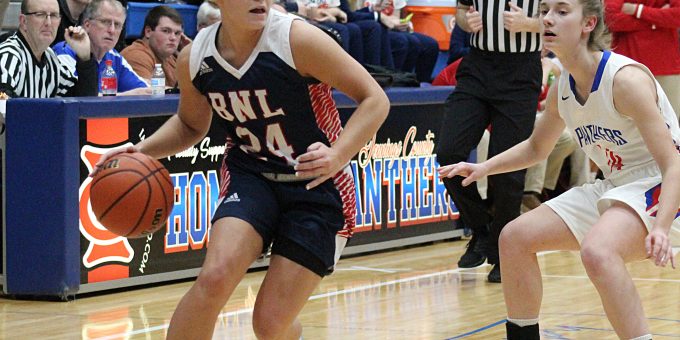 BEDFORD – The foe, dastardly and devious. The leading scorer, menacing and dangerous. The assignment, difficult and treacherous.

This looks like a job for . . .Superman? Supergirl? How about GCR, whose superpower has been, when asked to perform a Herculean job, the ability to shut down the best.

Bedford North Lawrence (12-4 and ranked No.15 in Class 4A) will face the task of conquering another opponent with a lethal offensive threat, which means senior guard Gracie Crulo-Rood will discard her sweet, innocent facade and become Super Stopper, the defensive diva, when the Stars face Columbus East (10-6) on Tuesday night.

When deciding how to handle the biggest weapon, BNL coach Jeff Allen often turns to his shortest starter. Don’t let the size and constant smile disarm you. Behind those sparkling eyes is a sinister, tenacious heart when it comes to defending.

Few have escaped. BNL’s last three games are evidence. East Central, Bloomington North and Castle all featured quality scorers, and those shooters went a combined 7-for-35 from the floor. All of them will have nightmares about No.24.

Crulo-Rood’s next target will be East sophomore Koryn Greiwe, who’s averaging a sparkling 21.7 points per game. This looks like a job for . . .

“When I give her an assignment, she’s going to try to do it to the best of her ability,” Allen said. “You love that as a coach. I have a great respect for her, and I think she has respect for me. That’s a great player-coach relationship.

“We’ve done a great job defensively. Obviously she deserves a lot of credit, because she’s the one that puts the urgency into it, puts the hard work into it. She’s had a lot of help from her teammates. That’s the thing I love about basketball, when you have a bunch of kids that work hard together.”

Crulo-Rood doesn’t operate in a vacuum. As a unit, the Stars have become The Defenders, allowing only 42.2 points per game. GCR depends on help, she gets relief from reserve Jenna Louden (who steps in the same role). Her skill is not limited to guarding guards, as she has tackled Jeffersonville’s Nan Garcia, Castle’s Natalie Niehaus and others who like to roam the lane.

“We’ve had Gracie on some assignments where she was outsized, kids who like to operate in the lane, and we had to give her a lot of help from the back side,” Allen said. “It’s a different situation with Greiwe, where she’s more on the perimeter, a driver and shooter. We have to rely on help from the gaps and sides. We want to make it as difficult for her as we can.”

Greiwe exploded early this season, scoring 32 or more in four of East’s first six games, including a 44-point outburst against Brown County. After a recent slump, held to single digits by Jeffersonville and Eastern Pekin, she came back with 29 against Seymour and 28 against Connersville. She can pop the 3-pointer, and she’s skilled at getting to the free-throw line.

She also has some vengeance in mind after BNL held her in check last year. She scored only 5 points, hitting 1 of 14 shots, as BNL crushed East 70-39. The Stars rushed to a 41-15 advantage en route to their eighth straight win in the series.

BNL has another goal in mind now. The Stars are 4-1 in the Hoosier Hills Conference race, but recent unfortunate, season-ending knee injuries to Jeffersonville’s top players (Garcia and Keslie James) left the Red Devils vulnerable. Jeffersonville has lost five straight, although the Devils could still protect their HHC lead with wins against Seymour and New Albany later this month.

“Do we feel badly for Jeffersonville? For Nan and James? Of course we do,” Allen said. “But it’s about us being able to take advantage of the situation, based on our performance and us playing well.

The Stars have won five straight and nine in a row against in-state competition. Their scoring leaders are Chloe McKnight (14.6), Irye Gomez (11.9) and Madison Webb (11.8), who had a double-double of 10 points and a career-high 14 rebounds last year against East.

Last meeting: Last year at East, the Stars rumbled to a 70-39 win. Jacy Hughes had 18 points while Jorie Allen (15 points, 10 rebounds) and Madison Webb (10 points, 14 rebounds) had double-doubles for the Stars. Claire Cunningham had 11 points for the Olympians.

Game notes: BNL has won eight straight games (by an average of 24 points per game) in the series with East.