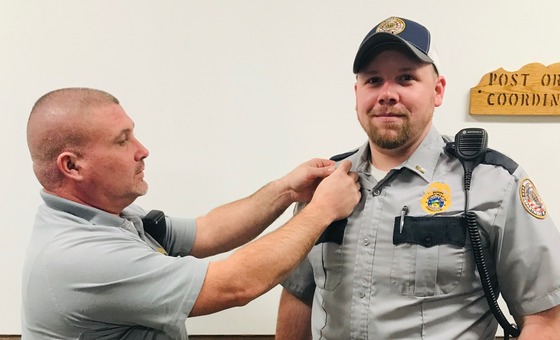 Ryan began his career as a Correctional Officer at WVCF in September 2012.  As an officer, Ryan worked a variety of posts including some in the facility’s most challenging housing units.  He not only adapted to the demands of each position but excelled.  Ryan was eager to learn from those around him, which helped him to become an excellent employee. His efforts were recognized in 2014 when he was announced as Officer of the Year, then again in March 2015 when he was promoted to Correctional Sergeant.

After his promotion to sergeant, Ryan was assigned to F Housing Unit (FHU) on the night shift.  During his time as a sergeant he used the skills he had acquired to coach correctional staff, improving their job performance, while growing as a supervisor.  Ryan transferred to the day shift in 2016 taking on additional responsibilities as the I-Bracket Quick Response Team (QRT) Instructor.  He also worked in the Shift Supervisor’s Office on occasion to gain experience for the next step in his career.

Vrzina then decided he wanted to further his abilities as a leader by participating in the Commissioner’s Experienced & Emerging Leaders Program.  While in the program he helped develop a cost-savings initiative which was later implemented across the Indiana Department of Correction (IDOC).  In addition, Ryan has also received numerous Supervisor of the Month awards.

Custody Supervisor Major D. Russell stated, “Lieutenant Vrzina has accepted every challenge handed him and has excelled time and time again.  He has excellent supervisory skills have proven to be an asset to the Facility.”