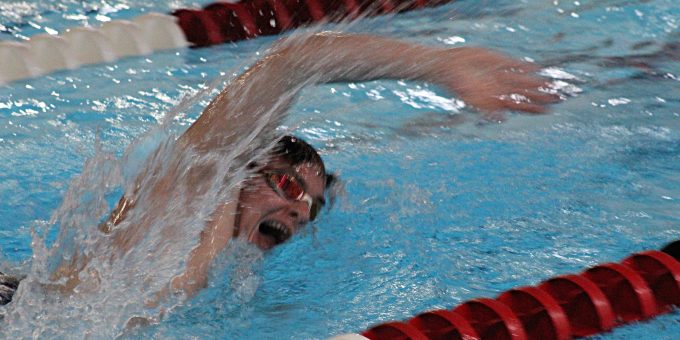 (BEDFORD) – The weary, rather than rest, finally got to race. And that made them happy.

After a 12-day break from competition (and using the word “idle” at that point is inaccurate, as swimmers go through the roughest training stretch of the season during the holidays), Bedford North Lawrence resurfaced with a vengeance on Thursday night.

The Stars splashed to a 129-55 victory over Columbus East in the boys meet, while the Olympians cruised to a 108-68 win in the girls meet as BNL’s lack of numbers took a toll.

BNL won every event among the boys as Andrew Swenson, Dayson Sorrells and Jacob Werley all won twice. That was a release of pent-up energy.

“You could tell the last few days of Christmas break, kids were getting kind of chippy,” BNL coach Terry Tlustek said. “The training was wearing on them and we hadn’t had a meet. They were itching to race.

“You always wonder what’s going to happen at that point, but I think the kids are getting over that hump. They’re learning how to swim tired, and the times are getting a little faster.”

“They were outstanding,” Tlustek said. “Some of the guys are swimming faster than their sectional time last year.”

”We had a lot of PRs,” Tlustek said. “The girls swam some races they weren’t used to, and they performed well.”

BNL will celebrate Senior Night on Tuesday against Bloomington South.