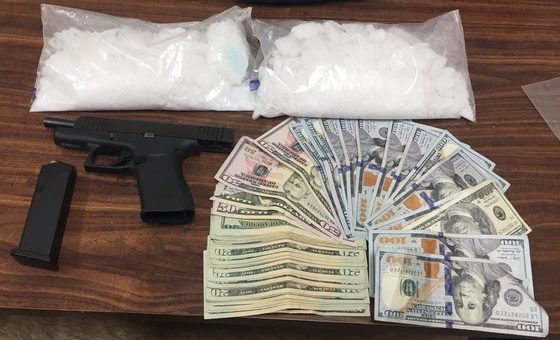 (HUNTINGTON CO.) – State Trooper’s from the Fort Wayne Post patrolling I-69 late last night arrested three men on felony drug charges during the course of a routine traffic stop, after seizing a significant amount of drugs, money, and a handgun.

At approximately 10:55 p.m. last night on Interstate 69 near the 283mm (just south of Markle), ISP Sergeant Kris Coffey conducted a routine traffic stop on a green Ford Taurus passenger car for an observed speed violation. During the course of the traffic stop Trooper Tyson Waldron and his ISP K9 partner “Zeus”, a trained and certified narcotic detection police dog, were summoned to assist Sgt Coffey. Zeus was deployed and quickly indicated a positive alert for the presence of illegal substances inside the vehicle. A follow-up search of the vehicle located an estimated two pounds of Methamphetamine, an estimated half gram of Cocaine, a loaded 9mm handgun, and over $2,000 in cash.

The driver and both passengers were taken into custody without incident and placed under arrest. They were transported to the Huntington County Jail, and booked into custody on several felony drug related offenses.