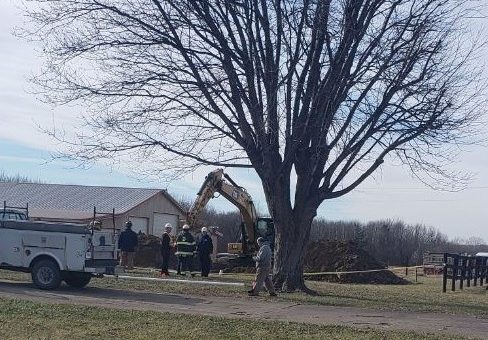 (BARGERSVILLE) — A central Indiana man who was working with his son to install a well died on Monday after a trench collapsed, trapping him 15 feet below ground, police said.

Crews worked for more than 10 hours before they recovered the body of Douglas Scott Abney, 56, at the worksite in Bargersville.

When the Bargersville Fire Department arrived at the scene, workers told them that a man was trapped about 15 feet below ground in the trench collapse just south of Indianapolis.

Fire Chief Eric Funkhouser said Abney and his son were working in a trench for a well that was under construction when it began to collapse Monday. The Bargersville man was trapped while trying to escape and Funkhouser said the son and another person couldn’t rescue Abney because the trench was collapsing too quickly.

The Johnson County Sheriff’s Office said rescue teams were not able to see the victim and decided that entering the trench was too dangerous. The crew’s mission then shifted from a rescue to a recovery.