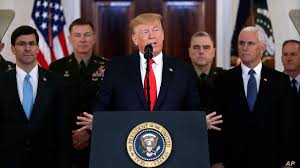 Speaking from the foyer of the White House, Trump announced that the U.S. will immediately place new sanctions on Iran “until Iran changes it’s behavior.” He defended his targeted killing last week of Gen. Qassem Soleimani, the head of Iran’s elite Quds Force. He added that Americans should be “extremely grateful and happy” with the outcome.

Trump reiterated his position that “Iran will never be allowed to have a nuclear weapon” and called for new nuclear negotiations to replace the 2015 nuclear deal from which he withdrew the U.S.

Trump also announced he would ask NATO to become “much more involved in the Middle East process.”