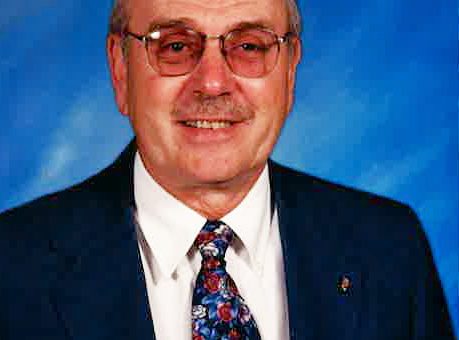 He was brought into this world by Pleasant Eugene and Mildred Isabel (Selby) Gentry on May 7, 1936.   His first family consisted of Kay Gentry and Frank Gentry. He married Brenda Sue Ferguson September 2, 1956.

George was a 1954 graduate of Bloomfield High School, received a B. S. in Education from Indiana University, and received his master’s degree from Michigan State University.  By God’s grace, guidance from his parents, and his involvement in Christian Youth Services, George became a community leader, elder of Fishing Creek Christian Church, and an educational administrator retiring in 1996 from Mitchell Community Schools.

He was also Citizen of the Year in 1996 and one of the founders of Scenic Hills Christian Church Camp.  George was past president of the Mitchell Rotary Club and a Paul Harris Fellow.

Funeral service will be at 1 p.m. Thursday, January 9th, in the Memorial Chapel of Chastain Funeral Home & Cremation Center with Brother Kyle Stewart and Brother Darrin Chastain officiating.   Burial will be in Talbott Cemetery. The family will receive friends from 11 a.m. until the service on Thursday at the funeral home.