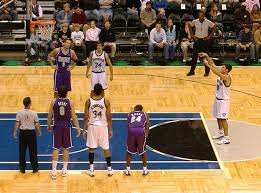 (MUNCIE) – In pro basketball circles, many players, coaches, fans and announcers believe that players get “hot” during certain periods of games, during which they are more likely to make field goals, but a new study from two Ball State University economists suggests that the hot hand is largely an illusion.

“Hot Shots: An Analysis of the ‘Hot Hand’ in NBA Field Goal and Free Throw Shooting,” a paper published in November by the National Bureau of Economic Research, investigates the hot hand hypothesis in NBA free throws and field goals.

The researchers collected the most detailed data to date on free throws and field goal attempts by the same players in the same games for the entire 2013-2014 and 2014-2015 NBA regular seasons.

The researchers found a hot hand for free throws.

“If a player makes his previous free throw, he is about 1.6 percentage points more likely to make his next free throw,” said one of the study’s authors, Erik Nesson, an associate professor in the Department of Economics at Ball State.  “This effect is larger if a player makes a streak of previous free throws and for free throws in quick succession.”  The hot hand effect in free throws is similar to previous work which analyzes other sports like horseshoes, darts, and baseball, and also similar to basketball shooting experiments in laboratories.

However, while free throws and shooting experiments offer a more controlled setting where game situations and shot characteristics are less likely to affect shooting percentage when basketball fans think of the “hot hand,” they are mostly thinking of streaks of field goals, not free throws.

In stark contrast to free throws, if a player makes a field goal, he is about 0.7 percentage points less likely to make his next field goal attempt.  Even when looking at streaks of made field goals, the researchers didn’t detect a hot hand.

Study co-author Robert Lantis, an economics professor, explained that the different results from free throws and field goals likely stems from how teams respond to a made field goal.

“Interestingly, both offenses and defenses respond to made field goals as if the hot hand effect exists,” Lantis said. “The offense will try to feed the ball to the hot player, while the defense will shift to stop another shot. In this case, the offensive player is more likely to step out of his area, taking a longer jumper, or forcing a field goal attempt against two defenders.”

“Put together, our results reinforce the suggestion that, while the physiological mechanisms behind repeated shot success found in experimental settings do exist in game situations, they are easily overwhelmed by other factors,” Nesson said.

The study’s results suggest that basketball players and coaches should think strategically on how to respond to a made field goal.

“If the other team makes a field goal, defenses should realize that the offense is more likely to focus on that player in future possessions,” Lantis said.  “Defenses may want to react as well to focus their attention on that player.  However, if defenses focus too much on one player, that leaves other offensive players less guarded.  Offenses may be able to exploit increased defensive attention on a single player.”