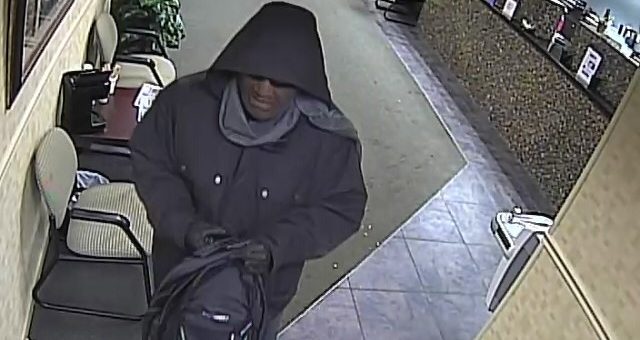 (BLOOMINGTON) – The Monroe County Sheriff’s Department’s detective division is asking for assistance in identifying the suspect responsible for a bank robbery who is shown in the pictures.

Deputies were called to the Union Savings Bank at 2237 S Curry Pike just after 1 p.m. Saturday.

The suspect, who was armed with a black pistol, entered the bank while two employees were preparing to close. The suspect was given approximately $2,000 in cash and left on foot.

A Sheriff’s K9 was able to successfully track the male south from the bank but it is believed the suspect may have had a vehicle waiting nearby.

If you can identify the individual, contact Detective Hahn at 812- 349-2822, email investigations@co.monroe.in.us, or send a message to the Sheriff’s Office Facebook page, but please do not publicly name or tag a person who may be the suspect.

The tellers were unharmed during the robbery.