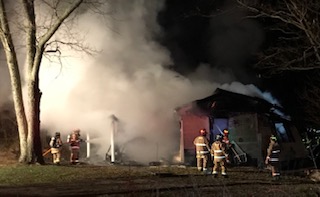 (BEDFORD) – A home was destroyed by fire Saturday evening on Tunnleton Road near Oak Hill Lane.

The fire was discovered by Shawswick firefighters as they were responding to a medical emergency in Fort Ritner.

“We found the home on fire as we were responding to an emergency medical call in Fort Ritner. When we came upon the fire, most of the fire was located in the rear of the home. No one was home at the time of the fire,” says Shawswick Volunteer Fire Department Fire Chief Bobby Brown.

There were no injuries reported while fighting the blaze.

The Shawswick Fire Department was assisted by Marion Township and Oolitic Fire Departments. Sixteen firefighters and five engines from the three departments responded to the blaze.

Firefighters were on the scene for several hours to make sure the fire was out and would not reignite.

Firefighters returned to the blaze at 8:30 a.m. Sunday for a rekindle.

The owners or occupants of the home are not known at this time.