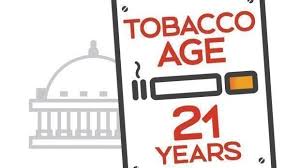 (UNDATED) – The legal age to buy tobacco products is now 21, but some Indiana retailers say they are unaware of the change.

On December 20th, the President signed legislation to amend the Federal Food, Drug, and Cosmetic Act, and raise the federal minimum age of sale of tobacco products from 18 to 21 years.

It is now illegal for a retailer to sell any tobacco product — including cigarettes, cigars, and e-cigarettes — to anyone under 21.

“To expect the more than half a million clerks, employed by some 10,000 tobacco retailers in Indiana, not to mention their customers, to discover that this law is already in effect is completely reckless” Scot Imus, executive director, said in the release.