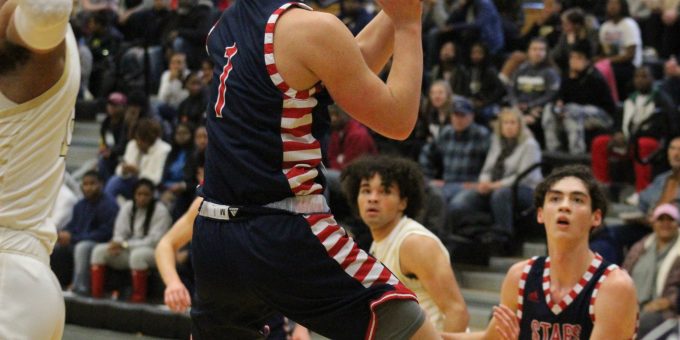 INDIANAPOLIS – Bedford North Lawrence coach Jeff Hein had Warren Central right where he wanted the fifth-ranked team in Indiana – slowed down, standing still and aching to do something. Anything except stand there virtually motionless, dribbling and staring at the opponent.

Nursing a two-point lead like an intensive care worker, the Warriors went against their nature, against their strength, against all their athletic advantages, and played stall ball for six minutes during a dramatic fourth quarter. That’s certainly going to age 28-year old, first-year coach Garrett Winegar in a hurry. But he ordered his team to not hurry anywhere, and it worked.

BNL (6-6) played almost perfectly to stun the state. The Stars had a four-point lead midway through the third quarter, and they were one possession away from a chance to get back through the metal detectors that grace the gymnasium entrance with a steely-eyed missle-man victory. Warren Central, to its credit, deflected that away.

“We gave a great effort,” said Hein, whose club was a 22-point underdog, according to the Sagarin ratings and John Harrell’s famed website. But what do they know? “We were in position, on the road, against a MIC team, and had a 3-ball in the air to tie the thing. On the road. While there are no moral victories, we played extremely well and showed a lot of heart tonight.”

So the final quarter played out like a chess match, with just as much excitement. Winegar signaled for the delay with 6:50 left, and Hein waved his Stars deeper into their zone, willing to let the Warriors shorten the game yet extend BNL’s opportunity to turn one turnover into a go-ahead bucket.

“I didn’t think we did a good job attacking the zone,” Winegar explained. “I wasn’t comfortable how we were playing against it. If they wanted to let us take a two-point lead to the last minute, that gave us the best chance to win.”

Warren, which was quite eager to continue its forward assault rather than assume a backward stance, made it work. Sean Black missed a one-and-one free throw with 41.7 seconds left, but Elijah Ray waded into the fray for a huge offensive rebound. Hunter Jackson made a free throw at 12.3, but BNL star Brayton Bailey charged the length of the court with the next rebound and scored with 4.1 left.

Stanley, WC’s best shooter, was fouled on the inbound pass, and he calmly swished a pair. The Warriors had a foul to give before putting BNL in the bonus and used it with 1 second left. From just in front of the WC bench, Colten Leach connected with Mollet on wing, but his jumper was harmless.

The collective relief from the winners was also measurable.

BNL got to that point with arguably its best performance of the season, considering the foe and the circumstance. The Stars shot to an 11-5 lead, fell down 24-19 as Stanley drained three 3-pointers over the BNL 2-3 zone that was designed to shade him. Warren went to the half with a 33-29 lead, and started the third quarter with Chandler Jackson’s 3-point play and Ray’s wing bomb for its largest lead at 39-31.

Rather than crumble, BNL clinched and answered. Bailey slashed the lane for a 10-footer, Kooper Staley added two technical free throws, Mollet drove for two baskets, and he dropped two free throws when Winegar was tagged with another technical. That burst gave BNL a 43-39 lead.

“We were smart-aggressive, for the majority of the time,” Hein said. “We attacked when we needed to attack, utilizing what we have skill wise against what they have. Did we execute what we were trying to do? Yes we did.”

The Warriors surged back in control as Black turned a steal into a layup and dropped a 3-pointer. Stanley added his last trey, and WC owned a 47-45 advantage at the final break. After Hunter Jackson and Bailey exchanged free throws, Warren went to its standstill ploy.

“Absolutely it played into our hands,” Hein said. “They wanted to shorten the game. That’s a high-level team. We’re down two, on the road, and I liked where we were. There was no reason not to. I wanted to test their patience. They didn’t really want to hold the ball for four minutes.”

No, they didn’t. But they did, longer even.

Stanley finished with 16 points while Black and Ray added 9 each. All of Stanley’s buckets were from long range.

“The kid we were really trying to shade hit four threes,” Hein said. “Our objective was to not let him have any open looks at all. That hurt us a little bit.” So did Warren’s 12 offensive rebounds, not unusual against a zone.

Bailey, continuing his spectacular play of late, had 22 points and 5 rebounds, while Mollet totaled 12 points. The Stars shot 60 percent and limited their turnovers to single digits against constant full-court pressure.