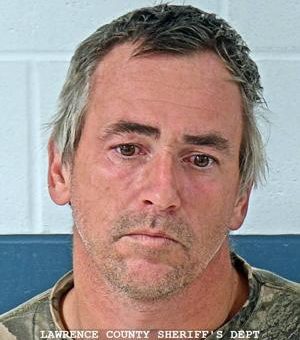 Phillips was arrested after Indiana State Police received information that Phillips was dealing large quantities of meth in both Greene and Lawrence Counties.

Police also learned that Phillips was operating a motor vehicle with a suspended driver’s license.

Trp. Garvin conducted a traffic stop on Phillips for the known driver’s license violation.  Trp. Klun deployed his canine, Loki, who gave a positive alert to the odor of a controlled substance in the vehicle.  Troopers searched the truck and located more than 28 grams of meth, scales, and other items of evidence.

Phillips was arrested and transported to the Lawrence County Jail on felony charges of dealing meth over 10 grams, possession of meth over 28 grams and driving while driver’s license suspended with a prior conviction.

Anyone with illegal drug information is encouraged to contact the Indiana State Police Bloomington Post at 812-332-4411.  Tips can remain anonymous.