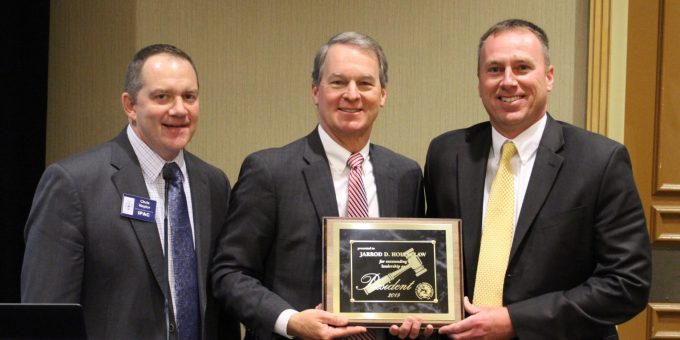 (INDIANAPOLIS) – Tippecanoe County Prosecutor Patrick Harrington was recently elected as President of the Association of Indiana Prosecuting Attorneys, Inc. and will serve in that role for 2020.

“I’m ready for this opportunity to help advocate for prosecutors across the state,” Harrington said. “I’d like to thank Jarrod for his work during this past year and I look forward to a successful 2020.”

In addition to Harrington being named President, the following slate of officers and board members for the Association was also approved:

After the Association meeting and election concluded, the assembled prosecutors also acknowledged former Cass County Prosecutor Lisa Swaim for her work as Chair of the Indiana Prosecuting Attorneys Council’s Board of Directors.

Swaim was recently appointed Judge in Cass County by Gov. Eric Holcomb to fill a vacancy created by the untimely and unfortunate death of Cass County Superior Court Judge Richard Maughmer, also a former elected prosecutor. Vice-Chair Anthony Quinn, the Dubois County Prosecutor, will lead IPAC Board meetings for the remainder of Swaim’s term, which expires in June of 2020.