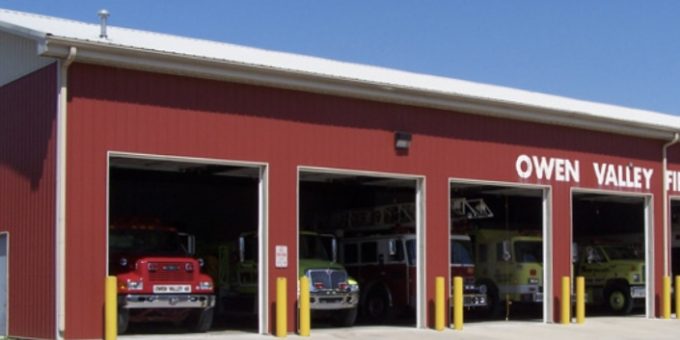 (SPENCER) – On December 31st, the Owen Valley Fire Department will no longer be providing fire protection to the Town of Spencer and Washington Township in Owen County.

According to officials, the Owen Valley Fire Territory voted not to renew the contract presented to the fire territory board in October.

The fire territory board provided Owen Valley firefighters a contract with a 7-day ‘take it or leave it’ stipulation.

“The contract itself presented is poorly written and infringes on our rights,” said Lt. Joe Frye of the Owen Valley Fire Department. “It is impossible or illegal for the members to agree with.”

Some of the issues concerning firefighters include having no say in line officers. Those will be appointed by the fire chief and extra duties can be assigned at any time without compensation. And if they refuse, they could be subject to termination without a hearing or due process.

There are no job descriptions pertaining to any spot on the fire department. There is no pay structure or amount in the contract as promised.

No rules, regulations or policies exist in the territory board.

“We cannot agree to anything that does not exist or is yet to be determined,” Fry added.

The department responds to more than 300 calls a year. A majority of fires are car accidents, according to the fire department.

There are more than 20 firefighters on the Owen Valley Fire Department – some are career firefighters.

There is concern that homeowner and business insurance rates will increase as the number of responders decrease.

“It seems we are at a point of no return. We sincerely appreciate all the support we have been shown by the community. It has been an absolute pleasure being able to serve our fellow Spencer residents day in and day out. We are proud of the group of men we have and the professionalism they have shown throughout the years. We are proud of the fires extinguished, lives and property saved, children and teachers we have met in schools, parades, we have participated in protection at Owen County Fair Event, and successful vehicle extrication and much more.”

The fire territory voted to create a new fire department in their last meeting. According to Steve Cradick there are 10-12 men that will join the new members.

An attorney for the Owen Valley Fire Territory Board, which oversees the department, said the contract they offered to the volunteer organization was fair. He said changes are the first steps toward eventually becoming a department with paid staff.

A full-time fire chief was recently hired, and they hope to hire two firefighters over the next year. The attorney said it is becoming increasingly difficult to find volunteer firefighters, which makes the change necessary. He is confident some of the volunteers will respond to fires that happen after the first of the year.

The next meeting of the fire territory is scheduled for Monday, January 13, 2020 at 6:00 p.m. at the Owen Valley Fire Department. If anyone wishes to speak at the meeting you must contact Doris Dunnigan at be placed on the agenda. Dunnigan at (812) – 821-4889.

Part of this story was obtained by WRTV Channel 6.