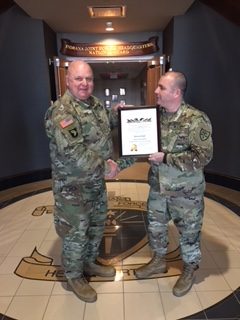 (BEDFORD) – Maj. Robert Cline is scheduled to retire from the Indiana Army National Guard after more than 33 years of service.

Cline began his military career in July 1986 as an active duty enlisted infantryman in the army. He transitioned to the Indiana Army National Guard in 1988 and in 2004 earned his commission as an officer in the Judge Advocate General Corps.

He deployed to Afghanistan in 2009 with Indiana’s first Agribusiness Development Team. During the deployment, Cline served as the mission commander and led more than 50 combat missions with the 101st Airborne Division, the 82nd Airborne Division, and the 25th Infantry Division.

“One of the best decisions I’ve made in my life is joining the Indiana National Guard. It’s been a driving force and very positive force, and I will certainly miss all of the men and women of the National Guard,” said Cline. “The whole experience has been an honor.”

Cline finishes his career while serving as the senior defense counsel for the headquarters of the Indiana National Guard.

He currently resides in Heltonville, with Audrey, his wife of 24 years and their three children. He is currently the chief deputy prosecutor for Lawrence County and will continue serving in that position after his retirement from the military.