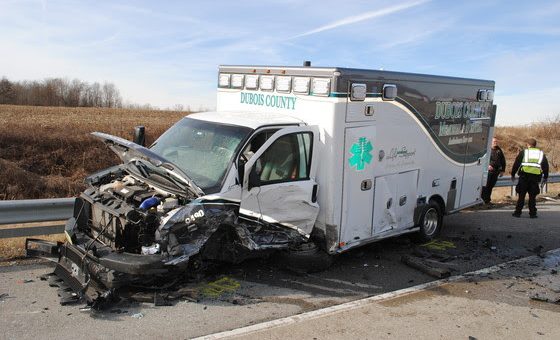 (DUBOIS CO.) – On Friday at approximately 1:20 p.m., Dubois County Sheriff’s Department and Indiana State Police responded to a 911 call of a crash with injuries at US 231, just south of State Road 162.

According to Indiana State Police, 37-year-old Michael Cannon, of Jasper, was driving a 2000 Pontiac northbound on US 231 when, for unknown reasons, he drove left of center and collided head-on into an ambulance traveling southbound.

The driver of the ambulance, 51-year-old William Luebbehusen, of Jasper, and his passenger, 42-year-old Patrick Brown, of Tell City, were taken to Jasper Memorial Hospital where they were treated and released.

Cannon was flown to Saint Vincent Hospital in Evansville and was later flown to an Indianapolis hospital for further treatment of his injuries.

The ambulance was not transporting a patient, nor was it on an emergency run at the time of the crash.