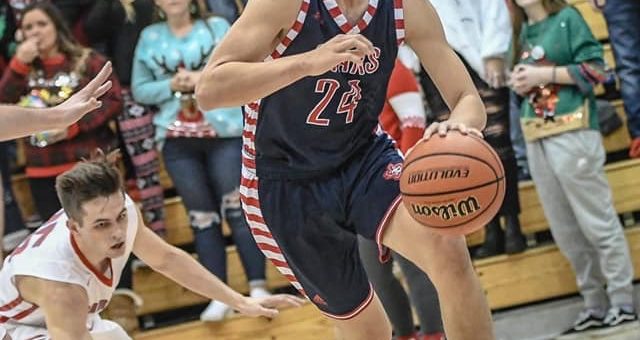 (BEDFORD) – With great power comes great responsibility, and with great success comes greater challenges. Silver Creek, the defending Class 3A state champion, has been equal – or better – to every confrontation.

The Dragons, ranked No.1 in the latest 3A poll, will invade BNL Fieldhouse on Saturday night, expecting more slings and arrows from the Stars, matching the shots they’ve deflected during the first five games of their title defense.

Both teams will be coming off tough games on Friday, with BNL visiting Madison for its first Hoosier Hills Conference road test and Silver Creek making a short trip to Jeffersonville to clash with the 4A No. 11 Red Devils. What will each have left 24 hours later?

Silver Creek will have plenty of pride. Those championship rings instill that, summoning energy when it’s needed.

“There’s no perfect words to describe it,” Silver Creek coach Brandon Hoffman said. “A lot of pride, very grateful for the kids we’ve got here at Silver Creek. We’ve had some very good players that have accomplished quite a bit.”

Good players? How about great. First among them is junior Trey Kaufman, a 6-foot-9 forward being mentioned as a top Mr. Basketball candidate next season. His college pursuers include Indiana, Purdue, Louisville and Xavier. He’s averaging 26.0 points and 9.3 rebounds.

How about 6-6 junior Kooper Jacobi, currently drawing interest from Akron, Indiana State and IUPUI. He’s contributing 18.6 points and 8.6 rebounds. Or how about sophomore guard Branden Northern, adding 14.6 points and 5 assists?

“I could argue Trey and Koop are our most improved players,” Hoffman said. “They’ve worked on their bodies quite a bit. Trey is about 30 pounds heavier than last year, They’ve done a lot to enhance where they can score. Kooper’s shooting has gotten so much better. His skill set has caught up to his motor.

“We’re developing every week. Last year’s team was very polished, kids with a lot of playing experience. This year we’ve only got three guys with varsity experience – although those three are very good – it’s a team that’s nowhere close to the team we’ll be in March.”

“I don’t know you will hold him down, no matter what you do,” Hein said. “We have to prevent the other guys from getting a lot of points on us. We have to be able to block them out and rebound because that’s a lot of size we’re giving up.”

“Brayton has been a handful for the last three years,” Hoffman said. “He’s obviously where it starts. They’re going to be tough to beat at their place. And I have a bad taste in my mouth from the last time we were there. It will be a mental challenge for us. They’ll give us their best shot because that’s the nature of the beast. I’m expecting a battle.”

Game notes: Silver Creek has won four of the five games in the series. BNL’s only win was a 50-25 triumph two years ago. Silver Creek’s average margin of victory has been 22.6 points.