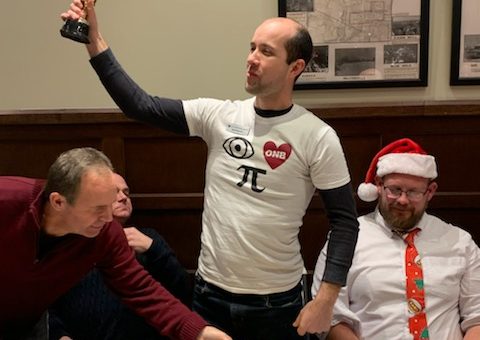 The party began around 5 p.m. with a fun, and holiday festive atmosphere with several Chamber members and their guests attending.

“This was one of the largest participation events we had. It was fun, and we want to thank our Platinum partners for sponsoring the event. Those sponsors include 1340 AM WBIW, 105.5 WQRK, 102.5 WPHZ, Bedford Federal Savings Bank, German American Bank, Hoosier Hills Credit Union, and Lawrence County Growth Council,” said Bedford Chamber of Commerce Communications Director Zarod Meyers.

“We also probably had one of the largest giveaways during this year’s event. This makes the second year we held this event at the Downtown Depot and this has allowed more space for attendees which in the past was held at the Bedford Chambers Office,” Myers added.

The pie-eating contest was won by Geoff Bush. He was awarded a trophy and $20.