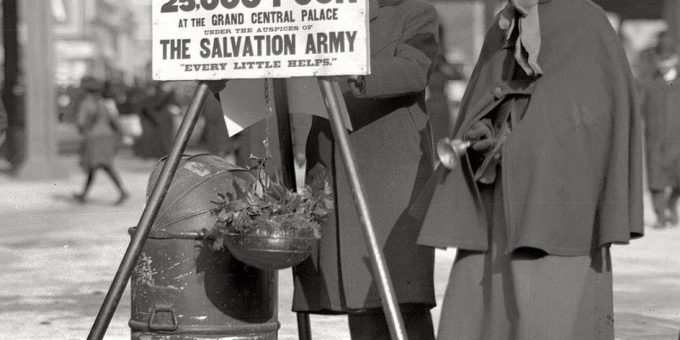 (UNDATED) – The Salvation Army’s iconic red kettles are feeling the impact of the short 2019 holiday season. With the last day of bell ringing set for Christmas Eve, many locations across Indiana are still far behind their fundraising goals. They are asking the community to help fill the kettles on these last few days to ensure that local programs aren’t affected by a shortfall.

“The late Thanksgiving really hit us hard,” said Major Bob Webster, Divisional Commander of The Salvation Army in Indiana. “A lot of our best locations don’t even start until Black Friday, so we lost about a week of bell ringing this year. Many of our Salvation Army programs depend on those red kettle donations to keep going, so we’re asking our donors to make these last few days really count.”

The Salvation Army has more than 450 red kettles in place across Indiana. Thanks to thousands of volunteers and seasonal bell ringers, last year these kettles raised upwards of $3.38 million in Indiana.

For many rural counties, the Red Kettle Campaign accounts for close to 100% of its annual funding. Salvation Army corps community centers depend on Christmas donations to fund around 80% of their year-round programs and services. This includes youth sports leagues and camps, emergency rent and utility assistance, and feeding programs.

New this year, The Salvation Army introduced mobile giving at its Red Kettle locations. The “Kettle Pay” technology allows Google Pay and Apple Pay users to simply tap their mobile phones to a kettle sign to get connected to an online donation form. For phones without near field communication (NFC) capabilities, donors also have the ability to use their native camera app to scan a QR code on the sign to make their donation. Donors can give as little as a few cents or make a large, impactful contribution. As fewer and fewer people carry cash, options like Kettle Pay allow donors to still support The Salvation Army’s traditional Red Kettle Christmas Campaign.

The Red Kettle Christmas Campaign got its start in 1891 when Salvation Army Captain Joseph McFee was looking for a way to address a hunger epidemic in San Francisco. His solution was to collect donations in a large soup kettle placed at Oakland Ferry Landing, eventually raising enough to give Christmas dinner to 1,000 of the city’s poorest residents. The idea caught on, and within a decade the kettles, which would eventually be painted red, could be found across the country. In 2018, the national Red Kettle Campaign raised $142.7 million to support Salvation Army programs in every zip code in the United States.

Make a donation or learn more about The Salvation Army by visiting SalvationArmyIndiana.org.

Volunteer bell ringers are still needed to help ring bells through December 24. Individuals, families, and groups are encouraged to sign up today at RegisterToRing.com.