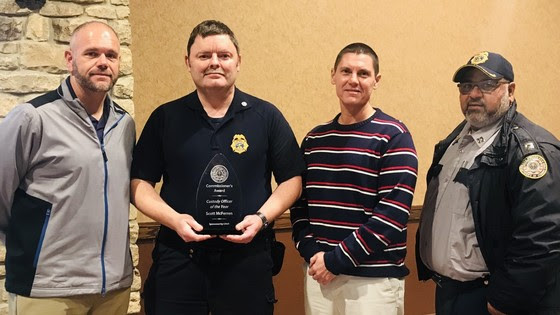 (MADISON) – Wabash Valley Correctional Facility (WVCF) is proud to announce that two team members received the employee of the year awards at the Indiana Department of Correction (IDOC) Leadership Symposium.  Officer Scott McFerren received the Correctional Officer of the Year award, while Oakland City University National Center for Construction, Education & Research (NCCER) Building Trades Instructor Jeff McNeely received the Educator of the Year award.  Both individuals display a commitment to professionalism and a true dedication to the performance of their job duties.

In Officer McFerren’s nomination, the facility stated the following that resonated with the readers.  “He has consistently worked with a goal in mind and we have seen his results.  He consistently leads staff in the right direction and sets a great example of what a true professional is.  He is always very security-minded and is consistent without allowing his self to ever become complacent.”

In NCCER Building Trades Instructor McNeely’s nomination, Oakland City University stated the following.  “Along with teaching at WVCF, Jeff has owned and operated his own construction and drafting business since 1986.  All of this experience provides Jeff with vast knowledge and a unique vision of the industry that he incorporates into his instruction.  His dedication to providing essential instruction has provided hundreds of students a brighter future in which they can become skilled laborers and higher wage-earners for their families.”

Warden Brown stated, “As Warden for WVCF I could not be more proud of the recognition that our team has received!  They are both  excellent examples of the kind of employees that WVCF is blessed to have on board!”

The Commissioner’s Awards were first introduced in 2005.  They were awarded in conjunction with the Indiana Correctional Association’s annual conference.  In 2016 the awards were divided to allow some to be presented at the ICJA conference, while others are presented at the Leadership Symposium.  Each year around September nomination forms go out to IDOC Leaders.  All nominations are reviewed and a winner is selected for each category.    The categories have changed somewhat over the years since the induction, however the feeling of pride in a job well done radiates. The winners receive a plaque and a cash spot bonus.