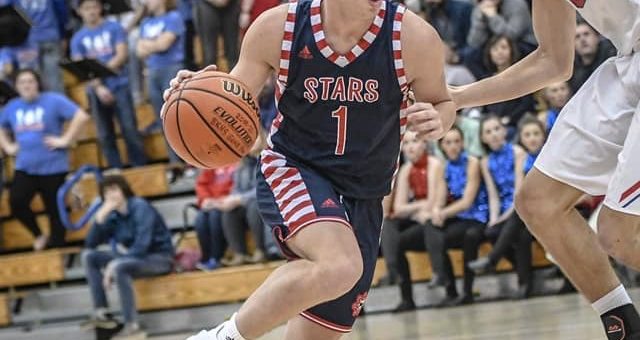 BEDFORD – During its current three-game winning streak, which includes the first road victory of the season, Bedford North Lawrence has set a stern tone with defense. Toughness can be measured in points allowed.

During its current four-game winning streak, which includes the first conference victory of the season, Madison has set an electric tone with offense. Amps can be measured in points scored.

Those two opposites will collide on Friday night, and somebody’s trend could suffer a reversal in course and success.

The stingy Stars (3-2, 1-0 in the Hoosier Hills Conference) will face the high-flying Cubs (4-1, 1-0) in a clash of styles. BNL has allowed only 41.7 points per game during its run, while Madison is racing like the hydroplanes on the Ohio, breaking the 80 barrier three times during its blast.

“Something will have to give,” BNL coach Jeff Hein said.

If he has any say in the matter, it won’t be BNL’s defensive stance. In order for the Stars to emerge with their first league road triumph, they must set a tempo and pace that takes away Madison’s strength.

“We have to set the tempo with our defense,” Hein said. “To be a good high school basketball team, you have to be able to play all tempos. At the same time we don’t want to get in a run-and-gun game with them.”

The Cubs, off to their best start in five years under new head coach Sherron Wilkerson, have four starters scoring in double figures. They run at every opportunity, and it’s by design. Wilkerson, the former Jeffersonville star, can’t match the size and strength of other HHC and sectional foes with his current roster, so he played to his team’s asset: speed.

“We face size and athleticism that comes into play,” Wilkerson said. “We use our speed to make things happen.”

They make it happen with junior Luke Ommen, who had 30 in the most recent win over South Decatur; with junior Luke Miller; with freshman Kaden Oliver. They attack in transition, they drive and launch.

“They like to play fast, they get the ball off the rim and drive it straight to the other rim,” Hein said. “You have to be able to stop them in transition.”

“Our effort is good and we’ve done a great job on the boards,” Hein said. “We’ve played well as a team. They’re all buying into playing good team defense, and that’s the way we have to play. We’re not very good one-on-one on an island, but we if get everybody working together we’re pretty good.”

“The first thing that you notice is they’re very well coached, very disciplined, and they play hard,” Wilkerson said. “Bailey is a really good player, and he has a good support around him. They have the ingredients to be successful.”

BNL has won three straight in the series and crushed the Cubs 62-34 last season. Those Cubs got shut down, particularly while scoring only 11 points in the second half. They’re much more dangerous now, presenting the next necessary step the Stars must take in their maturation process. They passed the last one, that first road win, on Saturday at South Knox. This will be tougher.

“We handled adversity well,” Hein said. “Some things didn’t go our way, and that’s going to happen on the road. We handled it and came through it. Madison is a conference game and it’ll be tough to win there, hopefully that experience will help us.”

Last meeting: Last year at BNL, the Stars smacked the Cubs 62-34. McCall Ray had 18 points for BNL, while Mason Welsh had 10 for Madison. The Cubs shot only 28 percent and scored only 11 second-half points.

Game notes: Madison is off to its best start since 2014-15. BNL coach Jeff Hein needs two more wins to reach 300 for his career.