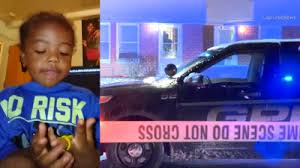 (GARY) — A shooting in northwestern Indiana has killed a 4-year-old Gary boy and left his pregnant mother hospitalized with gunshot wounds, police said.

Gary police responding to reports of a shooting at a residence about 1 a.m. Monday found the wounded boy, who was pronounced dead at a hospital. Gary Cmdr. Jack Hamady said in a news release that “at this time, it appears someone from outside the residence fired several shots into the residence.”

The child’s 27-year-old mother was hospitalized with non-life-threatening injuries after being shot in the arm and suffering a graze wound to her face. Hamady said three other children were in the house at the time of the shooting, which is under investigation.

The Lake County Coroner’s office identified the boy who died as Tory’on Dukes and said he was shot in the upper body while in bed. His death has been ruled a homicide.

Police urged the public to share information about what might have led to the shooting in Gary, about 30 miles (50 kilometers) southeast of Chicago.

Tory’on’s family “should be celebrating Christmas. It’s pretty heartbreaking to see, especially if you have children of your own,” said Edward Gonzales of the Metro Crimes task force.