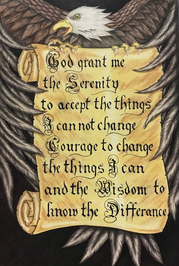 (CARLISLE) – Wabash Valley Correctional Facility (WVCF) offenders competed in an art contest and learned about far more than only art.

The offenders in the Sober Living Environment (SLE) were offered the opportunity to create a piece of art to express what they had learned about themselves while going through the recovery process.  The artwork was then judged by Warden Richard Brown, Deputy Warden Kevin Gilmore, and Deputy Warden Frankie Littlejohn.

“I chose to do the serenity prayer with the eagle because the serenity poem motivates me in my recovery while the eagle represents being free from my addictions,” said Delucenay

Each participant seemed very thankful for the opportunity to share what they had experienced while living in the SLE. They were proud of what they had accomplished and wanted others to know what it meant to them.  When asked about their drawings they stated the following.