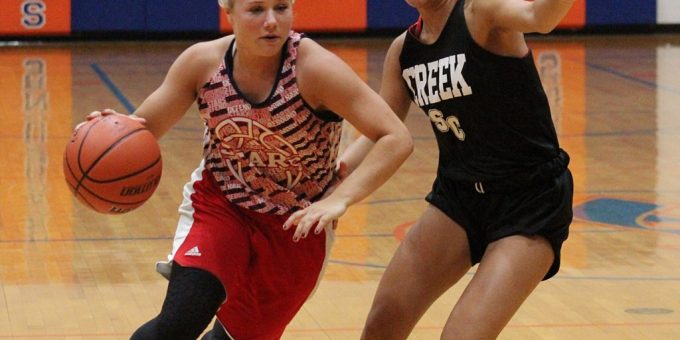 (BEDFORD) – For the past six months, Bedford North Lawrence has stayed awake and plotted revenge. Think a summer practice game is meaningless, with no consequence of outcome? Think again.

The Stars remember. This game, once this series debut was finalized, was circled on the calendar. Not with a red marker to denote hatred or bitterness, but with yellow to mark awareness as Silver Creek makes its first trip to BNL Fieldhouse.

The Dragons, ranked No.5 in Class 3A as one of Southern Indiana’s hottest and most dangerous teams, already own a ‘victory’ over BNL, one that doesn’t count for much – except motivation. Silver Creek surprised BNL 55-48 during a June scrimmage, unveiling a new-look squad with two fresh transfers. Now there are no secrets.

Silver Creek (10-1) already owns several notable wins this season, among them a 65-60 conquest of Jeffersonville and a 57-42 triumph over Ryle, the defending state champion in Kentucky. The Stars (7-4) are only thinking about the one that will never show up on a record.

“My kids remember that,” BNL coach Jeff Allen said. “I think my kids feel they have something to prove. We didn’t feel like we played as well as we can. I don’t know we were ready for them this summer. We didn’t know they have the athletic kids they have now.”

Rewind to June. Silver Creek was introducing sisters Alana and Kynidi Striverson, who moved across the Ohio River from Louisville Male. After only three weeks with their new team, they were instrumental in the scrimmage victory. And it showed Silver Creek coach Scott Schoen a glimpse of winter success.

“The opportunity to play BNL in the summer was good for us,” Schoen said. “It’s such a storied program, the blue chip of Southern Indiana. It was a win-win for us.”

But will it have an impact on the regular-season rematch? “Summer is so different,” Schoen said. “Nobody scouts, you just go play with your base stuff.”

“They have weapons and we’ll have to play well,” Allen said. “They attack the basket well, and they play at a fast pace. They do it pretty well, and they get out and go. Hopefully we’ll be able to handle it and make them play at our pace.”

BNL’s advantage will be interior size with senior center Madison Webb. Silver Creek’s usually likes to stretch the floor with defensive pressure, which could give Webb room to maneuver in the paint.

“They have size and strength, and they play so hard,” Schoen said. “They don’t have one person to focus on, we have to guard them all. They have so many weapons. We’ll have to be ready to play.”

Chloe McKnight leads the Stars in scoring at 14.3, while Irye Gomez (who scored 20 at Mount Notre Dame) and Webb are both totaling 11.2. The Stars are in recovery mode from the 70-37 loss to Mount Notre Dame, ranked No.8 nationally, although Allen was proud of BNL’s ability to compete for the first 20 minutes.

“From a positive standpoint, we didn’t turn the ball over against their pressure,” Allen said. “We turned it over because we got sped up, we felt like we had to score to keep up. And my kids fought hard. We were outmanned and get hit hard early, we could have stopped right there. I was proud we fought back and stayed in the game as long as we could.”

Last meeting: This is the first meeting between the programs

Game notes: The two teams scrimmaged in June, with Silver Creek posting a 55-48 victory. BNL is ranked No.17 in the IBCA poll, which does not separate by classes.