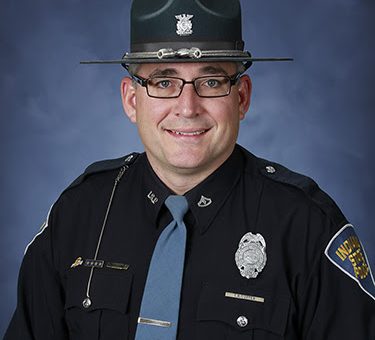 (BLOOMINGTON) – Master Trooper Travis Coryea was recently recognized in a ceremony in Indianapolis for achieving 25 years of service with the Indiana State Police.

Coryea graduated from the 51st ISP Recruit School on December 4th, 1994. For reaching this milestone, he received an award from Indiana State Police Superintendent Douglas G. Carter that consisted of a framed certificate and a longevity pin to be worn on the uniform.

Coryea grew up in Owen County and graduated from Owen Valley High School in 1990. Coryea graduated from Indiana State University in 1994 all while serving in the United States Marine Corps from 1990-96 where he was a member of the Infantry. He was Honorably Discharged in 1996 at the rank of Sergeant after already beginning his career with the Indiana State Police.

Upon his graduation from the ISP Academy, Coryea was assigned to the Lafayette Post where he served as a road trooper until ultimately transferring to the Bloomington Post in 1999. Master Trooper Coryea was then promoted to Commercial Vehicle Enforcement Officer in 2008 where he is primarily responsible for school bus and commercial vehicle inspections.

Coryea stated, “I have a wonderful family whose support has been and continues to be an important part of my career!”