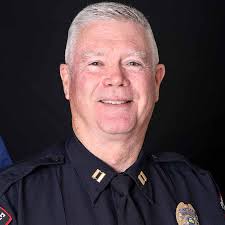 He recently learned he could use his excess of paid sick days and time off before he retires. He has accumulated more than 1,200 hours. Munroe’s last day at work was Nov. 22. His last official day will be Jan. 31, 2020.

Munroe, 61, served as the administrative captain for IUPD Bloomington; his duties include supervising the Investigative Unit, public information officer, and administrative assignments supporting the policy and mission of university public safety.

“It has been a blessing to spend my law enforcement career at Indiana University,” he said. “The years went by fast.”

Munroe began working for IUPD in 1979 as part of the IU Cadet Officer Program. He graduated from the IU Police Academy in 1980 and began working full-time for IUPD the following year.

Before Munroe started full-time for IUPD in 1981, he worked as an undercover narcotics cadet for a semester, living in a dorm.

His policing roles over the years include patrol officer, public information officer, an administrative lieutenant for IU Public Safety, and more recently, captain of operations. In that position, his duties involved coordinating large-scale events and managing the day-to-day operations of the uniform patrol.   He is also a member of the training cadre at the IU Police Academy as a certified Firearms and Active Shooter Instructor.

Capt. Munroe will spend his retirement fixing things around the house, cooking meals and spending time with his beloved grandchild.