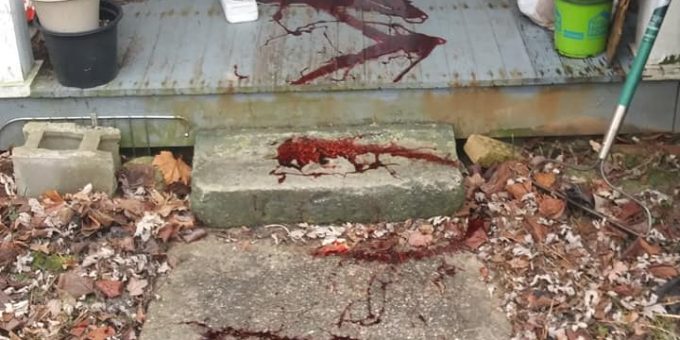 The vandals smashed windows, placed nails on driveways, and left a blood-like substance on entrances to homes and in mailboxes, including the home of Jeremy Hogan, a journalist of The Bloomingtonian.

Hogan’s spouse, Toni Acuri, found the blood-like substance which was also left on the home of Indiana Professor Eric Rasmusen, and a balloon contained a similar substance was thrown at the entrance of the Women’s Care Center of Bloomington in the 400 block of South College Avenue.

Hogan discovered what appeared to be blood dripping from his closed mailbox. He then saw a postal worker coming to deliver the mail, so he flagged him down before the mail carrier could open the mailbox.  The postal worker called a supervisor, who then called the police to Hogan’s home to take make an additional report.

The police assessed the threat and decided the mailbox was likely safe to open, and did so. Inside a balloon was found filled with a blood-like substance similar to what was found at Hogan’s home and at the Women’s Care Center of Bloomington.

In a press conference earlier today, the police say that these incidents are related. Tampering with a mailbox is a federal crime.

Hogan suspects the attacks on his home might be related to his coverage of the protest at the Bloomington Farmer’s Market. Hogan says two of activists followed him at various times over the last couple of months.

One of the activists, who has pink hair and a large hunting knife, has cursed at Hogan on more than one occasion and has invaded his personal space. They also would not let him photograph them.

During WBIW coverage in July of the protests at Bloomington’s Farmers Market the “No Space For Hate” would not allow WBIW to photograph them during the protests.

“It’s common practice for journalists to photograph people in public without their permission while covering news events,” said Hogan. “Often, as a courtesy, I attempt to get the permission of people I am photographing, but in a news situation, it is not always possible. The First Amendment, and cases decided by the Supreme Court protect the rights of journalists to do their work in public places.”

A vehicle was also damaged in the Waterman neighborhood. The vehicle is owned by Joshua Graham who is a vocal supporter online of the Schooner Creek Farm. Graham has also been receiving threatening messages especially since the activists released his personal information on Facebook in October.

The Bloomington Police Department is investigating the vandalism.

Bloomington Police say IU Professor Eric Rasmusen’s home was hit with a red liquid around 1:45 a.m. Rasmusen found the damage after hearing a slow-moving vehicle outside and then received a knock at the door.

Sarah Dye, of Schooner Farms, also found nails in her driveway and filed a police report.

Some information from The Bloomingtonian.