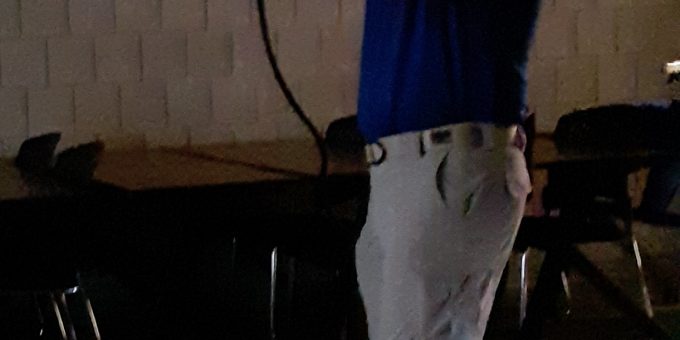 (BEDFORD) – Thirty feet and two seconds can mean the difference between life and death for a police officer. A decision no officer takes lightly.

Lawrence County Sheriff’s Department deputies and jail staff are training this week on the use of force using a Use of Force Police Training simulator. The simulator was paid for with funds from a JAG Byrne Officer Safety and Wellness grant. The department is seeking a grant to pay for its own simulator so officers can train more often.

“You have fractions of a second to decide what to do,” says LCPD Captain Chris Roberts who is assisting with the training. “No one wants to shoot anyone or to use deadly force. If you enter a deadly situation you have seconds to make a decision to keep you, your fellow officers and others safe.”

Officers have the authority to use reasonable force to effect an arrest, to prevent escape, or to overcome resistance as authorized by the Indiana Penal Code. Sometimes situations can turn deadly not only for the officers but for victims and bystanders quickly.

Sheriff Mike Branham said officers are instructed to respond with a level of force appropriate to the situation, acknowledging that the officer may move from one part of the continuum to another in a matter of seconds.

“No two situations are the same, nor are any two officers. In a potentially threatening situation, an officer will quickly tailor a response and apply force – if necessary. Situational awareness is essential, and officers are trained to judge when a crisis requires the use of force to regain control of a situation. In most cases, time becomes the key variable in determining when an officer chooses to use force,” he added.

Many times the mere presence of an officer will defuse a situation and no force is used. Sometimes it takes an officer becoming verbal to get a suspect to comply by becoming louder and shortening their commands.

After those don’t work an officer may gain control of a situation through physical force – by using grabs, holds and joint locks to restrain an individual and if needed a punch or tackle.

When that doesn’t work a chemical spray or baton or taser can be used to immobilize a combative person.

Lethal force may be needed if the suspect poses serious bodily injury or possible death to an officer, another individual or the general public.

“Our goal is to stop the situation safely, not to kill someone,” says Sheriff Mike Branham. “With simulator-based training, the trainee is afforded the opportunity to commit errors that in the real world would result in fatal consequences.”

Capt. Roberts says these scenarios can place officers in situations they may face on any given day.

“The simulator provides more realist training and covers a broader range of use of force options,” he added. “Or when force is not needed. It allows the officer to fill the recoil of the gun in their hand if they fire their weapon. It makes them think before they fire and where will that projectile go if they miss the target. The simulator will also respond to the officer’s commands. The suspect may or may not cooperate. The situation could escalate quickly or defuse.”

This morning the Transport Officer Ronnie Blackburn and Court Security Officer Mark Burton did the training.

“You have seconds to make a decision,” he added. “I had to react fast and be aware of my surroundings at all times. My senses were heightened from having to be fully aware of what was going on all around me.”