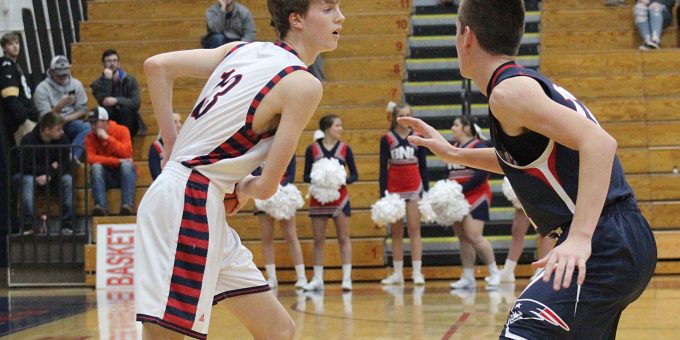 (BEDFORD) – First possession of the game, and Bedford North Lawrence could have been trigger-ready and itchin’ to fire. Touch it, launch it. That mentality inflicts a lot of young basketball players.

First possession, and the Stars went a minute without pressing the button. Finally, after 22 passes – count ‘em, 22, more than 5 times the number Norman Dale demanded – BNL got a shooter free, and Kooper Staley connected, setting the tone for Saturday night’s victory over Terre Haute North.

Not flashy, nothing heroic, certainly not selfish. Just effective. The Stars hit their first five shots, 54 percent overall, and won. That’s not a coincidence. That’s the efficient style BNL, without size and with minimal experience, can win with.

Can the Stars duplicate that? They’ll find out when they open Hoosier Hills Conference action with a mirror opponent on Friday night. BNL and Columbus East share similar records, game keys and coaching philosophies. Take a look into the eyes, tell what you see?

The Olympians (1-2) and Stars (1-2) will see something familiar in the reflection, inexperienced teams still seeking to establish a true identity, still hoping to copyright the winning formula for the future.

BNL took a huge step in that direction with the 56-42 triumph over the Patriots, a win BNL coach Jeff Hein called the perfect preparation for the Olympians.

“We can’t take anything for granted,” Hein said. “We played well Saturday night, that doesn’t mean we will play well on Friday.

“I liked our patience. We had some good, long possessions where we got baskets. We got what we needed to, looked a lot more organized and our ball movement was better.”

East got its win over Noblesville, a 43-42 thriller, but suffered losses to defending Class 3A state champion Silver Creek (75-40) and 2A No.5 Southwestern (57-49). The Olympians are going through growing pains.

“We’re young, a very young and growing team,” East coach Brent Chitty said. “We’re just trying to get better. We’ve got a long way to go. It’s a grind. We’re not scoring a lot of points, so every possession is monstrous for us. We need to relax and play.”

East will feature 6-3 junior Tyler Boyer (13.0), and BNL should remember him. Boyer scored 22 last season as the Olympians raced to a 77-75 win in a defense-optional clash. Junior guard Jacob Pierce is contributing 11.0.

If BNL has an edge, it’s with senior Brayton Bailey, who’s averaging 19.3 after his 24-point performance against TH North. Bailey had 19 last year against East.

“When you have someone as good as Bailey, it helps the younger players grow up a lot faster,” Chitty said. “He’s been starting for 12 years (actually four, otherwise there’s an eligibility issue) down there. He’s a college player, and we don’t have that.”

Trey Mollet is adding 10.0 points for the Stars.

Both teams are chasing the HHC title that’s been elusive. BNL won its last crown in 2011, East in 2003. The first step would be the first win.

“They’re going to play us hard,” Hein said. “In the conference, it doesn’t matter who you play, it’s going to be a battle. We know each other well. It’s those grind-it-out games where you have to do the little things well. You have to defend, rebound, take care of the ball, all the little things if you expect to win.”

With his next basket, Bailey will move past Joey Ray (1,112) into sixth place on the school’s career scoring list.

Last meeting: Last year at East, the Olympians shot down the Stars 77-75. Tyler Boyer had 22 points and Drew Johnson added 21 for East, while Jathan Ritter totaled 24 and Brayton Bailey tallied 19 for BNL.