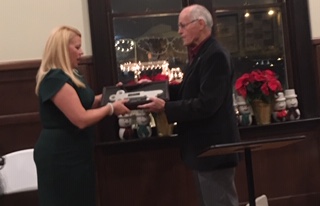 (BEDFORD) – There was a lot to celebrate Tuesday evening at the Milwaukee Depot with several city employees, friends, and relatives sending well wishes to Mayor Shawna Girgis and five city council members.

In addition to the underlying parting of the Mayor and City Council members, they also celebrated Mark Scherschel’s 70th Birthday.

The celebration started off with a letter of congratulations from Senator Mike Braun’s office that was sent with former Jasper Mayor Terry Seitz. Jasper is now a Stellar Community and Chamber of Commerce City of the year.

Mayor Girgis then talked about working with her amazing staff and city council members who helped her in getting things accomplished for the City of Bedford.

There were some challenges when Girgis first started as mayor with high unemployment, the potential for General Motors leaving the city, and budget issues that needed addressing.

However, having served three terms as mayor, Girgis and the city council were able to transform downtown with renovations and a new education center.

“I am going to miss the people I am with every day,” she added.

Each of the city council members were given a token of appreciation that was created by Half Moon Limestone from Mayor Girgis as she spoke about each individual and what they meant to her over the years.

Penny May was described by the Mayor in her work with the Bedford Revitalization Inc. Girgis spoke about her arriving in Bedford and the moving of the Wiley House from 25th Street and Washington Avenue. Girgis also noted Penny’s husband Jack as a city council member – “A Stellar Foundation you laid.”

Michele Murphy – became a city council member following a vacancy – “You were never afraid to ask questions. You a wonderful person.”

Patrick Robbins – Robbins died while in office and was not forgotten with his work in establishing the Bedford Redevelopment Commission.

Bill McFadden – filled Patrick Robbin’s place on the city council at the Robbins’ family suggestion – “He has been good to the community and in his service as a city council member.”

Adele Bowden-Purlee – was described as a true friend. Noted for her 25 years as Chamber of Commerce President and eight years as a city council member – “A fun and tough lady.”

Judy Carlisle – Mayor Girgis talked about the first time she was on the campaign trail, and Judy inviting her into her home. “I felt welcomed right from the start. I appreciated the kindness she gave to me.”

Mark Scherschel – “He was the one I was supposed to be afraid of. He was the numbers guy, and I was nervous when I had to ask about funding for the StoneGate Building.” But, Girgis stated that was all false. He told her he wanted to help me accomplish the task and Stonegate Arts and Education Center came to life.

Byron Buker – was described as a wonderful friend, and in some ways as a father figure. Mayor Girgis and Buker were walking buddies and he would fill in for Girgis when she was not able to attend meetings.

There were a few tears shed during the evening.

Byron Buker then talked about Girgis. How no one knew her well only that she was married to a young Bedford doctor and everyone had trouble pronouncing her name. Buker went on to describe how she assembled a team to get her elected. Then noted the many accomplishments the city has seen under her leadership. From the new facades, sidewalks, and the depot the event was being held in.

Buker then described Girgis’ determination to land the Stellar Grant. The city was turned down in 2010, but Girgis didn’t give up and finally in 2013 Bedford was named a Stellar community.

Mayor Girgis was finally given a key to the city.

“I have given out a lot of these, and now I finally got one. I always wanted to have one. Thank you,’ said Girgis.

“It was a pleasure and honor to serve, the Mayor has done some excellent things. I will miss serving but sure the next Mayor will be great,” said Michelle Murphy outgoing City Councilwoman.

“When I served there was no D (Democrat) or R (Republican), we all worked together for the good of Bedford. It was a pleasure to serve,” said Bill McFadden Outgoing City Councilman.