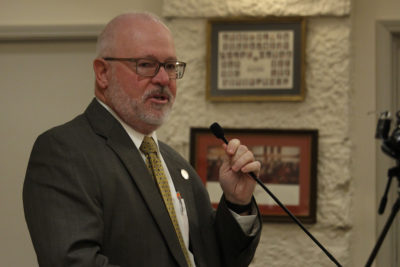 (INDIANAPOLIS) – David Powell was awarded an Indiana Sagamore of the Wabash during the Indiana Prosecuting Attorneys Council (IPAC) Winter Conference in downtown Indianapolis for his service as IPAC’s Executive Director.

Rep. Greg Steuerwald was on hand to present the award to Powell and thank him for his eight years of service for the state’s prosecuting attorneys. Powell stepped down from his role as Executive Director in October.

The Sagamore of the Wabash is one of Indiana’s highest honors and each recipient is chosen by the current state governor. Gov. Eric Holcomb was unable to be in attendance Tuesday when the award was presented but sent along his thanks with Rep. Steuerwald.

“On behalf of prosecutors and the state of Indiana, thank you, Dave for all of your work over the years,” Rep. Steuerwald said as he gave Powell the Sagamore.

The first Sagamores were handed out in 1946 and go to people who are “distinguished by his or her humanity in living, loyalty in friendship, wisdom in council and inspiration in leadership.”

In addition to providing quality training and resources for Indiana’s 91 elected prosecutors and their offices, Powell also took an interest in passionately advocating for prosecutors in the Indiana General Assembly. Powell is a member of several policymaking boards, making sure the voice of prosecutors is heard when key decisions are made in regards to law enforcement, criminal justice matters, and community safety.

He continues to serve at IPAC as Senior Counsel.

About the Indiana Prosecuting Attorneys Council:

The IPAC is a non-partisan, independent state judicial branch agency that supports Indiana’s 91 prosecuting attorneys and their chief deputies. It is governed by a 10-member board of directors of elected prosecuting attorneys. The IPAC assists prosecuting attorneys in the preparation of manuals, legal research and training seminars. It serves as a liaison to local, state, and federal agencies, study commissions, and community groups in an effort to support law enforcement and promote the fair administration of justice.