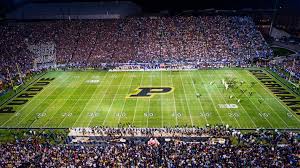 (WEST LAFAYETTE) – Purdue University will add a name to their field. Beginning with the 2020 football season, the field at Ross-Ade Stadium will be named Rohrman Field.

FOX59 reports, the name was approved by the Purdue Board of Trustees during their meeting on December 6th.

Rohrman Field is scheduled to be dedicated at the Purdue football 2020 home opener on September 12, 2020, against Memphis.

The Rohrman family owns and operates one of the largest automobile groups in the United States, with 30 franchise dealerships in Indiana, Illinois, and Wisconsin.

The business originated in Lafayette, Indiana, in 1963, when Rohrman opened a used car lot. Soon after, he acquired a dealership that started the Bob Rohrman Auto Group.