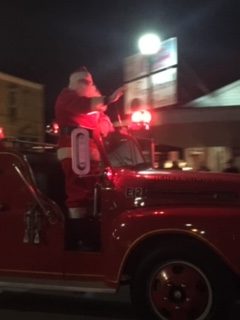 (MITCHELL) – The “Small Town Christmas” event sponsored by the Mitchell Parks Department brought Santa to town on a fire engine on Friday evening.

The Mitchell Fire Department also provided a “Good Will” Chili Supper which started around 6 p.m. to warm up attendees and fill their hunger.

Children visited with Santa Claus and received a goody bag which included an apple, orange and peppermint stick.

There were free desserts, hot cocoa, and apple cider. Troy King provided music at the event. Christmas songs were played on a sound system prior to the parade.