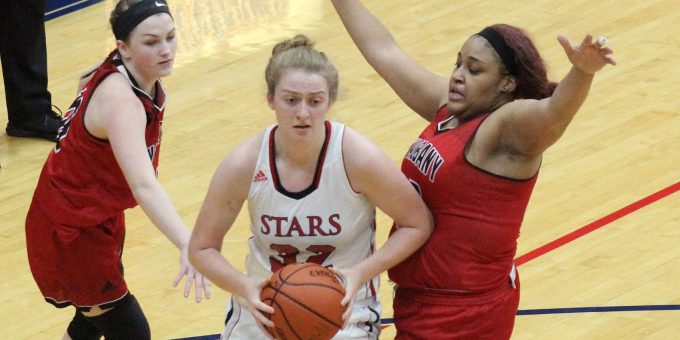 BEDFORD – The growth was measurable, like the kid who charts his status with a pencil mark on the kitchen doorway. Bedford North Lawrence displayed its new maturity with its first road victory of the season.

Now the Stars will be asked to duplicate that improvement in the second stop of their three-game road swing through the Hoosier Hills Conference. BNL (5-3, 1-1 in the league) will visit New Albany on Saturday afternoon.

The first step was a little shaky, as they often are. Jennings County, with star Addyson Kent, displaying Chris Kyle range and deadly accuracy, kept shooting the Stars down with 8 treys. Yet BNL kept churning, breaking free from a fourth-quarter deadlock to win with late comfort.

“When you go on the road, don’t shoot well, have a girl have a great night against you (Kent totaled a career-high 28 points), and still win by double-digits, you have to feel pretty good about that,” BNL coach Jeff Allen said.

“That’s the maturity level we’re starting to see with this team. There’s going to be nights like that, when things aren’t going well, and you have to defend, handle the ball and grind it out. We did that.”

BNL, with Madison Webb recording her first double-double of the year, powered through for a 53-43 triumph and momentum for the next challenge. New Albany (3-4, 0-0) has the quick guards and a power presence in the paint to press BNL’s weak spots.

The Bulldogs have struggled offensively, averaging only 38 points per game, but they recently conquered Eastern Pekin (46-41 in double OT) and North Harrison (48-47 in overtime) to end a four-game skid. They will feature a trio of pesky guards and left-handed 6-2 center Naria Reed (a transfer from Louisville Ballard).

“We’re excited to get into conference play, and we are fortunate enough to start with the queen of the mountain in Bedford,” New Albany coach Tammy Geron said. “It will be good for us to see them early in December and see where we are. A big key for us, and an indicator for the game, will be turnovers and the free-throw line,

“I think they have a different look this year, but we will have our hands full with Webb down low, especially when we go to the bench, and keeping the guards – especially Chloe (McKnight) – from getting good looks at the perimeter.”

Webb and McKnight are both averaging 13.8 points per game, while Irye Gomez is contributing 10.1. McKnight and her backcourt teammates (Gracie Crulo-Rood and Karsyn Norman) are all averaging over 2.5 assists per game, and the Stars had a season-low 8 turnovers at Jennings.

“I like where we are, taking the things we’ve talked about, what we have to improve, and taking it to heart to work on it,” Allen said. “With New Albany’s athleticism, it’s about rebounding and handling the ball. They’ve given us problems in the past over the years, so we have to get off to a good start and do those things well.”

Last meeting: Last year at BNL, Jorie Allen scored 30 points as the Stars cruised to a 60-35 victory. Madison Webb added 13 points for BNL, while Alayasia Douglas had 17 for the Bulldogs.

Game notes: BNL, unranked in the state 4A poll, is rated 12th by the Sagarin computer power rankings. The Stars are also No.19 in the IBCA poll, which does not separate by classes. BNL’s strength of schedule is 11th in the state.