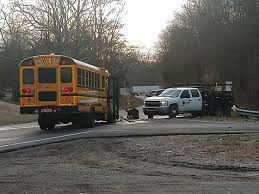 (VERNON) – A Jennings County School Corp. bus aide was killed in a two-vehicle collision at 6:30 a.m. Wednesday at the State Road 7 and State Road 3 split near Vernon.

Boyd was transported to St. Vincent-Jennings Hospital in North Vernon where she was pronounced dead by the Jennings County Coroner’s office.

Boyd had worked for the school corporation for more than a decade. As an aide, Boyd rode on the bus to monitor students.

ISP Sgt. Stephen Wheeles said no students were on the bus at the time of the crash. The bus was reportedly used to transport special needs students.

At the same time a 2013 Chevrolet truck, being driven by 48-year-old Harry T. Palmer, of North Vernon, was traveling north on State Road 7.

Palmer attempted to turn south onto State Road 3 in front of the bus resulting in the bus striking the passenger side of Palmer’s truck.

Palmer and a passenger in his vehicle, 44-year-old Steven P. Graham, of North Vernon, were both transported to St. Vincent-Jennings Hospital for treatment of non-life threatening injuries.

Ringer was not injured in the crash.